Our annual Easter Egg Hunt is back and this time we have gone virtual! There are some fantastic prizes to be won so why not have a go! You can enter the competition through our Social media accounts on either Instagram or Twitter

To play: find and click on the Easter Eggs in this picture, which will lead you to Easter themed questions. Use LibrarySearch to find all 6 answers. Send them by DM to us on Instagram or Twitter  to be in with a chance to win  Amazon vouchers: 1st place £30, 2nd place £25 and 3rd place £10 Good luck!

The clocks are changing

Got some “time” to read?…Here’s some time related books in our collection:

A brief history of the philosophy of time by Bardon, Adrian

The revolution in time: chronology, modernity, and 1688-1689 in England. Claydon, Tony

Encountering the past within the present modern experiences of time. Kattago, Siobhan

The images of time an essay on temporal representation. Le Poidevin, Robin

Our Craiglockhart Campus is home to the Business School. The land and buildings at the campus have a recorded history going back more than 700 years. Blending the old and the new, the Lindsay Stewart lecture theatre sits alongside the original building.

END_OF_DOCUMENT_TOKEN_TO_BE_REPLACED

To celebrate Women’s History month we thought it might be nice to celebrate some incredible Scottish women both alive and sadly gone. We can only fit in a few here so if you are interested in learning more, why not look up some more information at librarysearch.napier.ac.uk 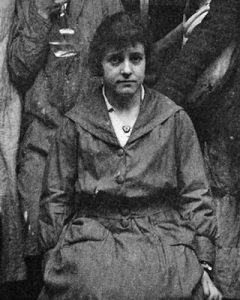 One little know Scottish woman whose story deserves to be better remembered is Christina Miller. Despite being born both female and hearing impaired in 1899, and later losing her sight in one eye, she battled against the norms of the time to become a respected analytical chemist. She was an inspirational teacher and mentor to generations of students.

All-round amazing person, Mukami McCrum has lived in Scotland most of her life. She fights for women’s rights, in particular BAME and LGBT women who need support from domestic abuse. She is one of the founders of Shakti Women’s Aid and campaigns to end Female Genital Mutilation.

She was the chief executive of Central Scotland Racial Equality Council and has brought her deep commitment to race and gender justice to many organisations, including Akina Mama wa Afrika, World Council of Churches, Responding to Conflict Trust. She has an MBE for her community and human rights work.

END_OF_DOCUMENT_TOKEN_TO_BE_REPLACED

Our Sighthill Campus is home to two schools, the School of Applied Sciences and the School of Health & Social Care. . Serving more than 5,000 students and staff, facilities include the wards, labs and the [EN]GAGE sports centre.

END_OF_DOCUMENT_TOKEN_TO_BE_REPLACED 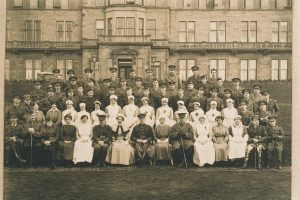 The month of March includes two important dates in the calendar for the War Poets Collection at Craiglockhart Campus, as we mark the birthday’s of the celebrated poet  Wilfred Owen (born 18th March 1893) and the eminent psychiatrist and anthropologist, Dr William Rivers (born 12th March 1864)

At our Craiglockhart campus, the original building was used as a military hospital during the First World War.  The hospital treated around 1801 officers, suffering mostly from neurasthenia  , or war neurosis, between 1916-1919. Neurasthenia was more commonly known at the time as shell shock. 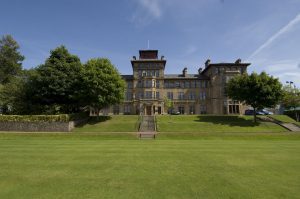 Those of you who studied English literature at school may be familiar with Wilfred Owen, the WW1 soldier-poet, as his works are taught not only in the UK  but in many other countries around the world.  2nd Lt. Owen was to become one of the leading poets of the First World War.  He was treated at Craiglockhart War Hospital for shell shock during the summer months of 1917.  Wilfred was in the care of Dr (Capt.) Arthur Brock, who treated his patients using ergo-therapy, or the “work cure”.  More than a century later, the University’s Occupational Therapy students provide us with a contemporary link to Dr Brock’s work. 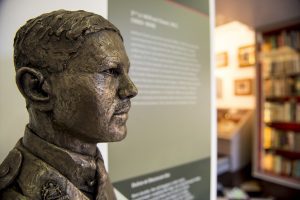 Many of Wilfred Owen’s  poems, such as Anthem for Doomed Youth and Dulce et Decorum Est  were drafted or composed whilst he was a patient and he edited six issues of the hospital magazine, The Hydra.  Wilfred Owen recovered his health and returned to the Front but was killed on active service on the 4th November 1918, just one week before the Armistice was declared. 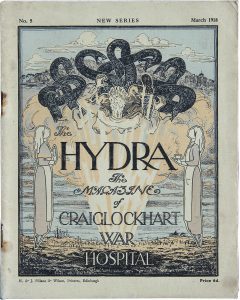 The recently discovered missing copies of The Hydra magazine.

One of the most recognised names in English anthropology and psychiatry is that of Doctor William H R Rivers, born in Chatham, Kent on 12th March 1864.  William Rivers qualified as a doctor from the University of London and St Bartholomew’s Hospital at the tender age of twenty-two, the youngest graduate until recent times. You may recognise the hospital, as the Duke of Edinburgh was treated there for a heart problem recently. Rivers lectured at the University of Cambridge and was a polymath, being involved in the fields of ethnography, anthropology, medicine and psychiatry.

Dr Rivers joined the Royal Army Medical Corps during the First World War and was appointed Senior Psychiatrist at Craiglockhart War Hospital.  Dr (Capt.) Rivers was an extremely popular member of the medical team at the hospital, using dream analysis and the talking cures to help his patients. He is best known in literary circles as being the doctor who treated the poet Siegfried Sassoon at Craiglockhart. Dr Rivers returned to academia after the war but died in June 1922.

You can find out more about both these men in the War Poets Collection at Craiglockhart (University Covid-19 restrictions apply at the moment) or visit our website at www.napier.ac.uk/warpoets

Our Merchiston Campus is built around the historic 16th-century birthplace and home of our very own John Napier. It’s home to three schools, The School of Computing, The School of Arts & Creative Industries and The School of Engineering & The Built Environment.

END_OF_DOCUMENT_TOKEN_TO_BE_REPLACED

March is Women’s History Month as well as being International Women’s Day on the 8th! It’s a time to celebrate the social, cultural, political and economic achievements of women that happen every day. It also serves as a call to action for accelerating gender parity and raise awareness for equality.

END_OF_DOCUMENT_TOKEN_TO_BE_REPLACED

With the weather outside utterly freezing right now, it’s important to keep warm. Here are some great reads from our collection full to the brim of things you can do and learn while inside.

From picking up the knitting (or crochet) needles, to busting out your musical skills, expand your horizons!

END_OF_DOCUMENT_TOKEN_TO_BE_REPLACED

All about Inter Library Loans

Are you starting your research and you find that one great article, but the full text is not on LibrarySearch?

What to do next?

First, check whether we really don’t have what you want in Edinburgh Napier University libraries. See details at Find a specific journal or article, Find a book.

If you are looking for an article, use Journal Search to quickly check for the journal title (click Journal Search at the top of LibrarySearch) or check within subject-specific databases. Not all articles will show up on a quick search of LibrarySearch. See the LibGuide for your subject to find out more about the best way to search for your particular subject area.

Items to support regular coursework should be held by the library – check your reading list on Moodle. If you are having trouble accessing books on your reading list or all the items are on loan, please contact your School’s Subject Librarian.

But if we don’t have what you want… Then request an inter library loan!

We can borrow items from the British Library and other UK libraries. The library pays the costs to make this free for you.

-Click the Inter Library Loan tab and complete the form, filling in as many fields as possible.

We are all working hard behind the scenes but given the current restrictions we can only request electronic items and they are taking longer to arrive than usual.

Usually, you’ll receive an email from the British Library containing a secure web link to your requested article.

Need a space to study?🖊📒 You can book indiv

🌻It's Carer's Week! It is an annual campaign to

You can now browse our shelves again! But if you s

World Ocean Day is here to connect us all together

#WorldEnvironmentDay is celebrated annually on 5 J

It's #BookfaceFriday Quite a challenge doing a #b

On yer bike! It's #worldbicycleday We have a supr

Box of Broadcasts, or BoB as it is affectionately

...Now how do I shelve those books again?

“This should be the spirit every Monday. Know th

Graduating this year? Love Your Library by cleari

😲 It's National Share a Story Month! Why not ma

📕😊 You can now browse our shelves again when

Keep up with key computing trends and learn how to analyse data, protect against cyber threats, implement new technologies and more.

Explore our brand-new range of cybersecurity short courses to upskill you and your organisation. 📈👇

Need a space to study?🖊📘

You can book individual study spaces in our study rooms via https://resourcebooker.napier.ac.uk/

Please remember to wear a face covering unless exempt. 😷

It's Carer's Week! It highlights the challenges unpaid carers face and recognises the contribution they make to families and communities.

Visit http://Napier.ac.uk for information on the support available for Student and Staff Carers.

😀 A reminder that you can now browse our shelves. Please use the hand sanitisers provided when doing so.

And, our Click & Collect service is still running!
For more information visit https://my.napier.ac.uk/library

Surfing the web?🌊 You can find more information about World Ocean Day in the link below:

There are reports of major website outages for some large organisations. We're monitoring our sites & resources, so let us know if you're having any access issues & we'll investigate.