Today we are celebrating the work of Ploy Bunluesilp, one of our recent graduates from Digital Media and Interaction Design.  For one of her year 4 project’s Ploy created a virtual reality project to help refugees settle in the UK.  She has written the article below to explain a little more about the project and how she is continuing to develop it after graduation.

“I wish I had this VR to help me when I first arrived in UK,” said one of the refugee users after trying the VR project that designed to help refugees and asylum seekers to settle in their new country by using virtual reality (VR).

The project was designed for the Visual Effects Storytelling module that using virtual reality, Unreal Engine (UE) and photogrammetry to see the potential of the technology on how it could help to create realistic world, storytelling and educate the users in enjoyable way. 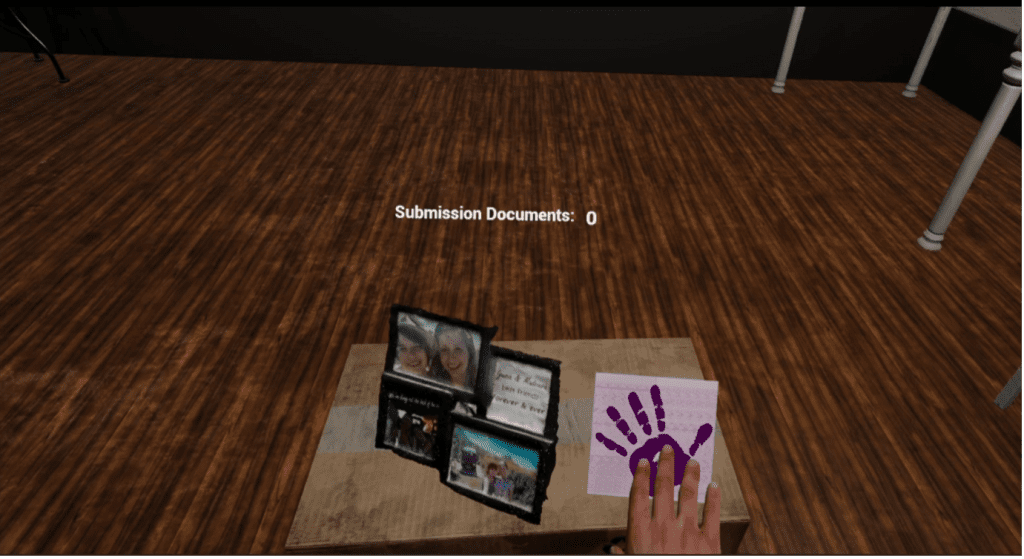 Figure 1: The picture frame was created by photogrammetry.

The users can interact and listen to a story that introduces the characters and teaches the user how to register at a GP surgery and learn all the necessary information that will help them to prepare to start a new life in the UK. 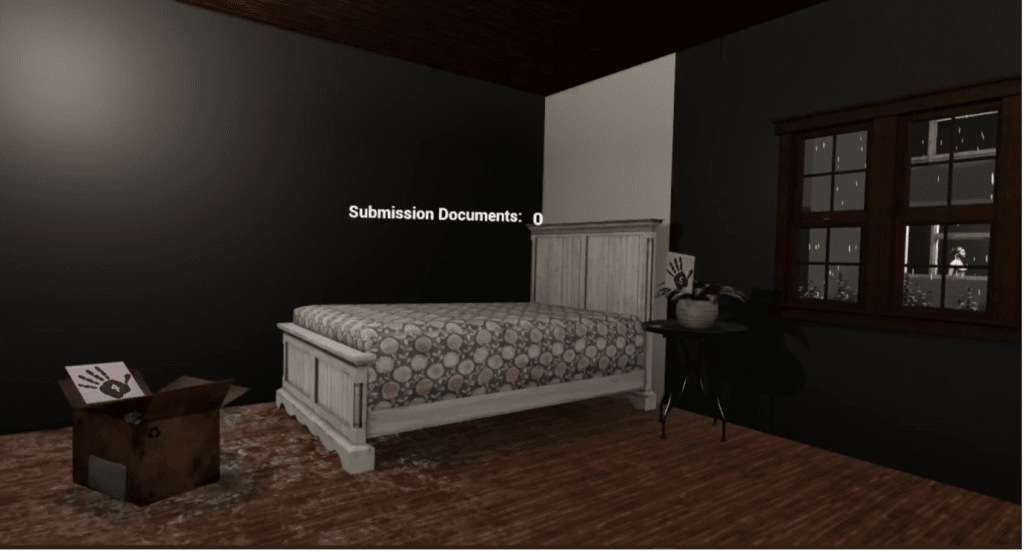 Figure 2: The user has to follow the numerical order of handprints to hear the story. 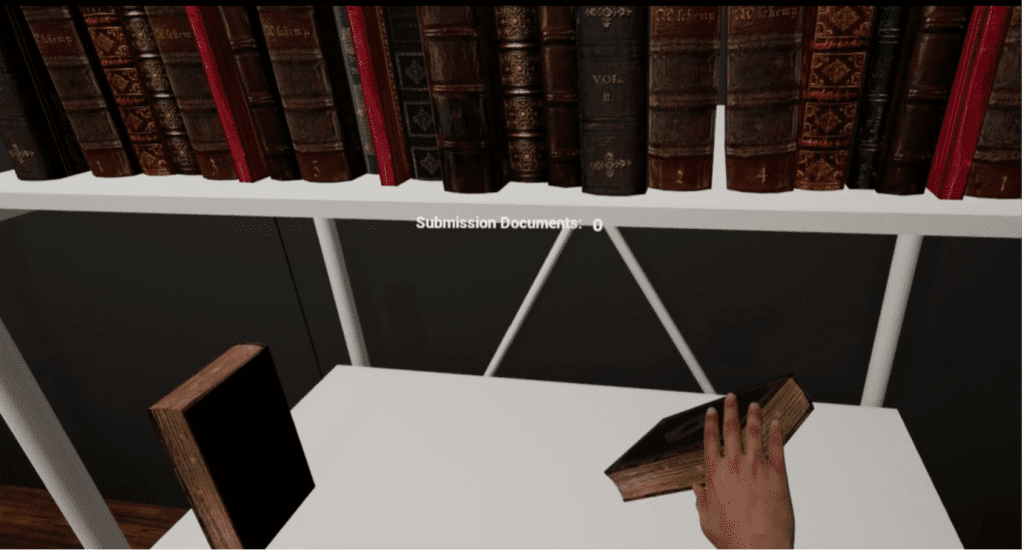 Figure 3: User is putting the book away.

In this project, the users play part of Amal who was a refugee that just arrived in the country and was put in the temporary council flat where she felt lonely and had no friends. Then her new magical friend Hope appeared to guide her through how to integrate with the new culture and what she needed to do to launch her new life. 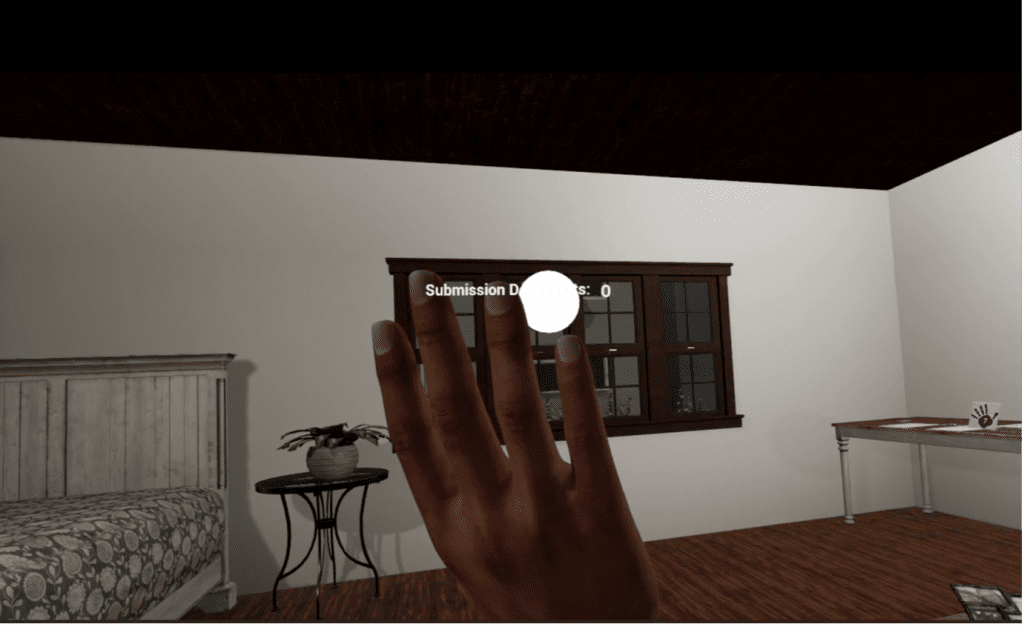 Figure 4: When Hope appeared, the room went from being grey to being brighter.

The project was formulated based on interviews with few refugees from Syria, Iraq and Thailand as well as secondary research which applied the technique from the Design Thinking module to understand the journey of refuges and their problems.

After understanding their problems, the first prototype was designed using the narrative of own innovative story based on the primary and secondary research.

The users had to follow the numbered handprints and instructions from the voice over to navigate the space and to learn the story of Amal with the help of Hope to connect with the world. When Hope appeared to the room, the room was turned from dull to brighter room. The users had to pick up all the necessary document and register them at the GP.  The goal is to give them hope and reassurance and enable them to navigate their new life. 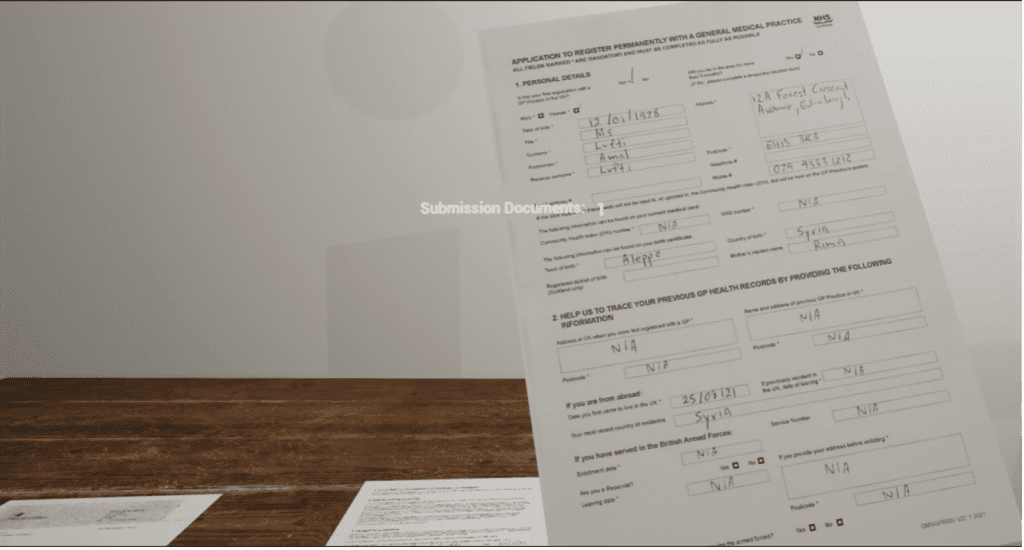 Figure 5: User picked up the document that needed to submit to GP. 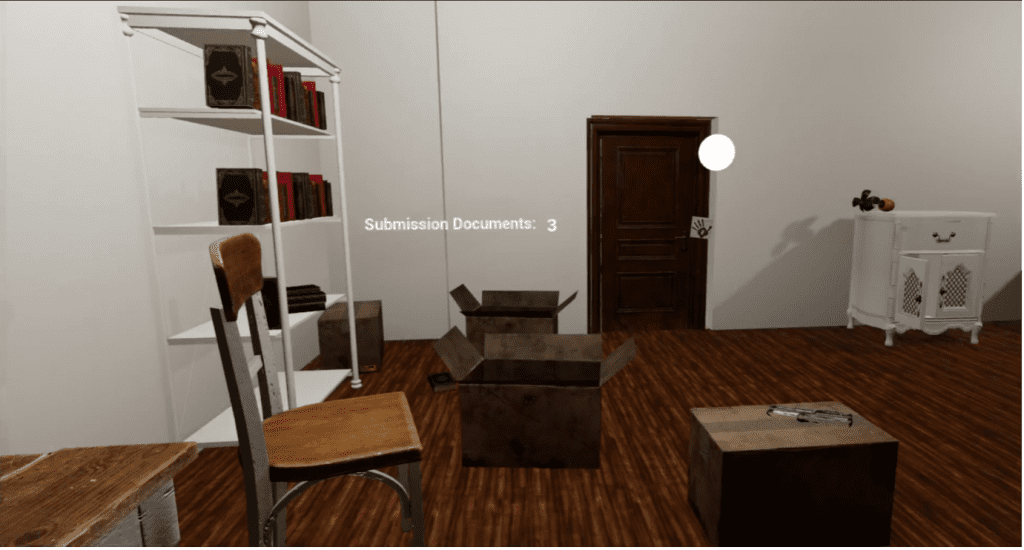 Figure 6: Interior of the room 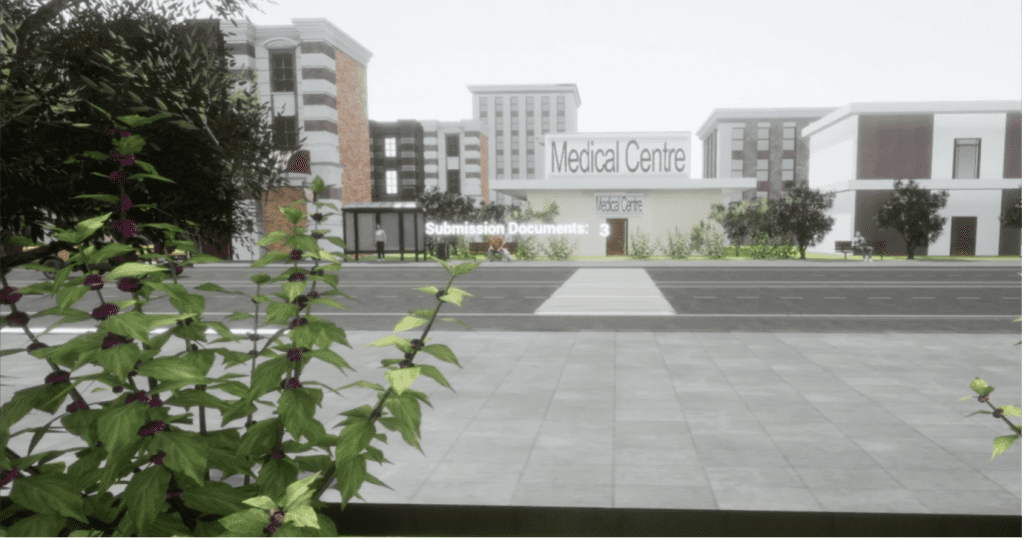 Figure 7: Exterior of the Medical Centre 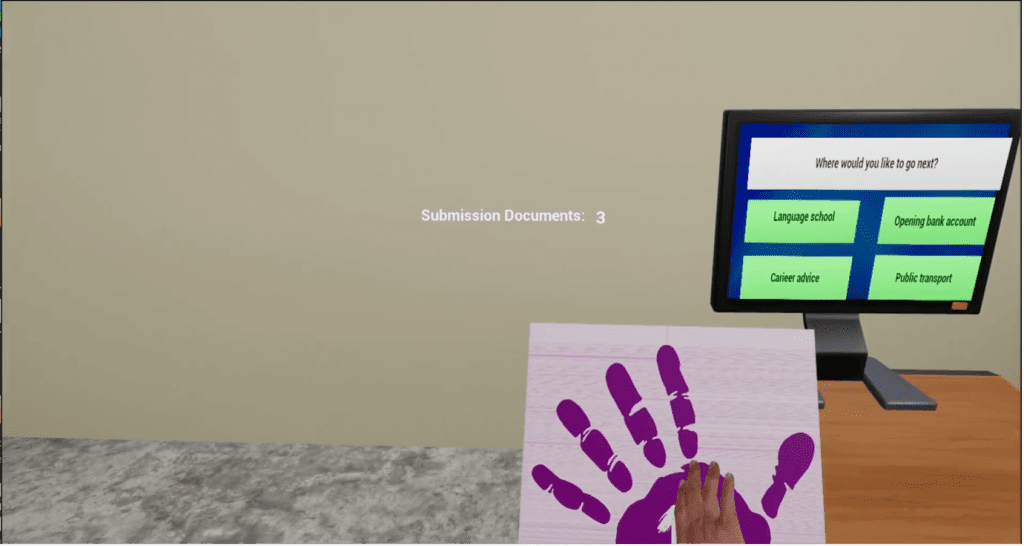 Figure 8: The user was using teleportation mechanism to travel the world

The first prototype was tested by the users and received well feedback that could see the potential that it would help the refugees and asylum seekers to feel more confidence. This VR education training allowed them to learn by doing, make mistake and gave them more chances to learn what the right way to do it.

“There is always stress when you forget something… But a great aspect is to have this safe space to explore and get more comfortable with the situation you’ll have to go through in real life,” said another refugee user.

After the first prototype has been tested, the second version was created to improve on different aspects to make the project looks and feel more immersive.

In the future, more episodes would be created to help the refugees to be familiar with different scenarios.

Figure 9: The computer screen showing different scenario that plan to create in the future.

On November 22, 2022, the project was shown at the Wealth of Nations Conference in Glasgow where businesses, community organisations and civic society in Scotland are supporting a Wellbeing Economy.  Some of the Refugee charities that attended the conference have been showing their interests on the project and would like it to be used to the refugees that just registered with them. The project will be continued developing as it has potential to make the world a better place.

Many thanks to Ploy for sharing her project . The Visual Effects Storytelling Module is run by John Morrison and Dr. John McGowan.

You can check out what our year 2 students have been making on the Playful Interaction instagram – https://www.instagram.com/playfulinteractionenu/

They are given a challenge each week to create a response to a “Playful Provocation” using the Arduinos and the skills they are learning  – can’t wait to see how they incorporate these into their final projects!

Thanks to Suzi Cathro and the student on the year 2 Playful Interaction module for sharing this work.

We are excited to share with you “New signs for animation”  a short animated film, created to raise awareness of the issue surrounding the availability of Animation/Games terminology for sign language users – both locally and abroad. The team, led by lecturer Jon Mortimer, consisted of two recent ENU graduates and four deaf artists, and was supported with funding from ENU’s Public engagement fund.  It helps  to highlight the struggle students from the deaf community encounter trying to pursue a career in the animation or games sectors, due to a gap in available language.

“New signs for animation”, has recently been nominated for awards and continues to be considered for film festivals around the world: 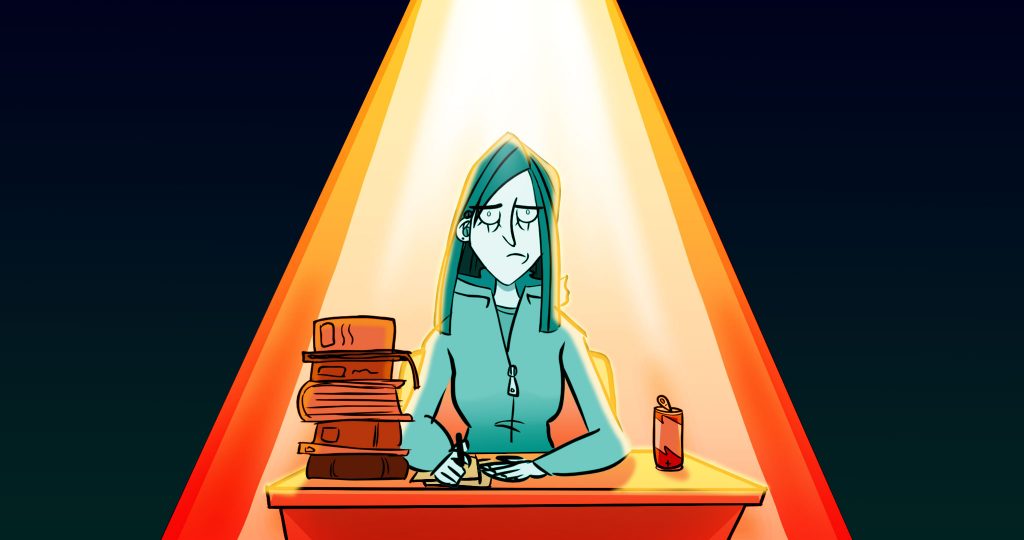 A Still from the animation.

More Than Code! Find out more about Creative and Social Computing at Edinburgh Napier University

We are constantly amazed by what our students achieve with digital technology! They learn to combine creative ideas and technical skills; working on projects that always put people at the centre– whether that is making a new virtual reality experience, designing sound for a game or making sure a new app works well and looks great.  In fact, we use computers as tools on so many different kinds of projects it’s impossible to list them all!

We offer a range of undergraduate programmes including Digital Media and Interaction Design, Sound Design, Web Design and Development, Informatics for Business and User Experience Design.

You can sign up for the open day and find virtual tours  here – https://www.napier.ac.uk/study-with-us/undergraduate/meet-us/open-days

Check out more about our undergraduate courses here-

Digital Media and Interaction Design and also check out our blog

You can apply to start these courses in year 1 or join us in year 2 or 3 if you have completed a suitable HNC or HND – see the course pages for more information. 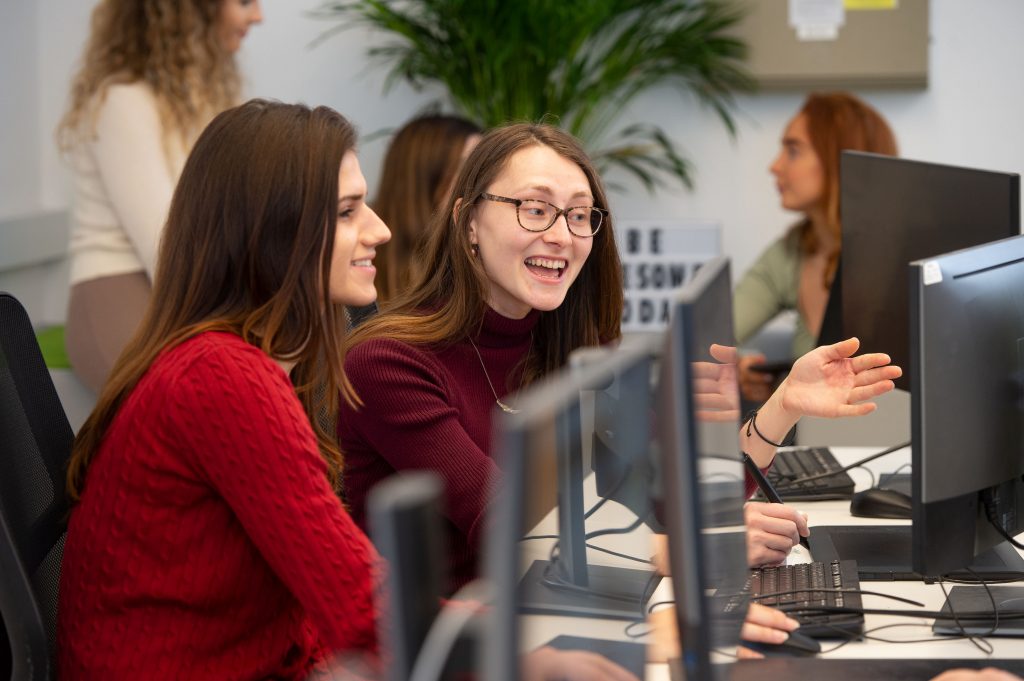 Featured Project: How to Save Human Problems by Lucienne Kunz

Today’s featured animation is by Lucienne Kunz.  Inspired by recent events, for this project Lucienne created characters representing some of the biggest issues humans have to deal with – and exploring how they interact with each other.

This work was created for the 2D animation module run by Fiona Stewart and Andrew McKelvey.  Thanks to Lucienne for allowing us to feature her work.

We’re so excited to share this piece by Sophie Spalding, one of our year 2 DMID students.  There are definite echoes in this story of the fact that a lot of us have been alone more than usual this year and looking for a little contact – human or otherwise.   The pre-production images below show Sophie’s character designs and an excerpt from her storyboards – finishing these to a high standard meant the story was clearly mapped out ahead of beginning the animation process.  We hope she makes a second episode so we can see what the characters get up to next…. 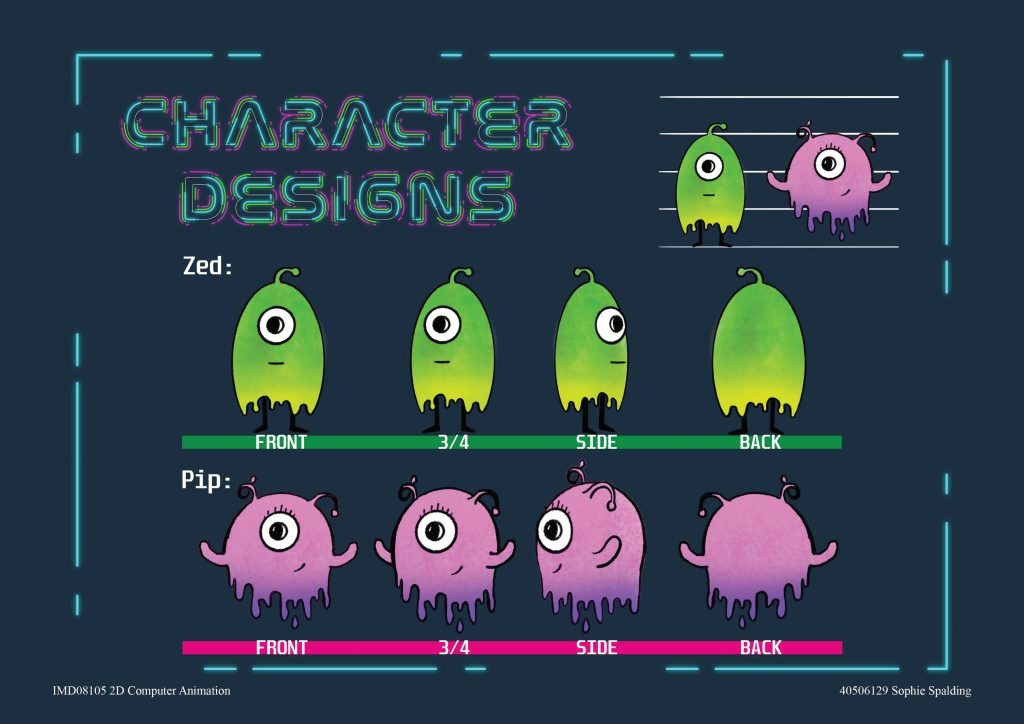 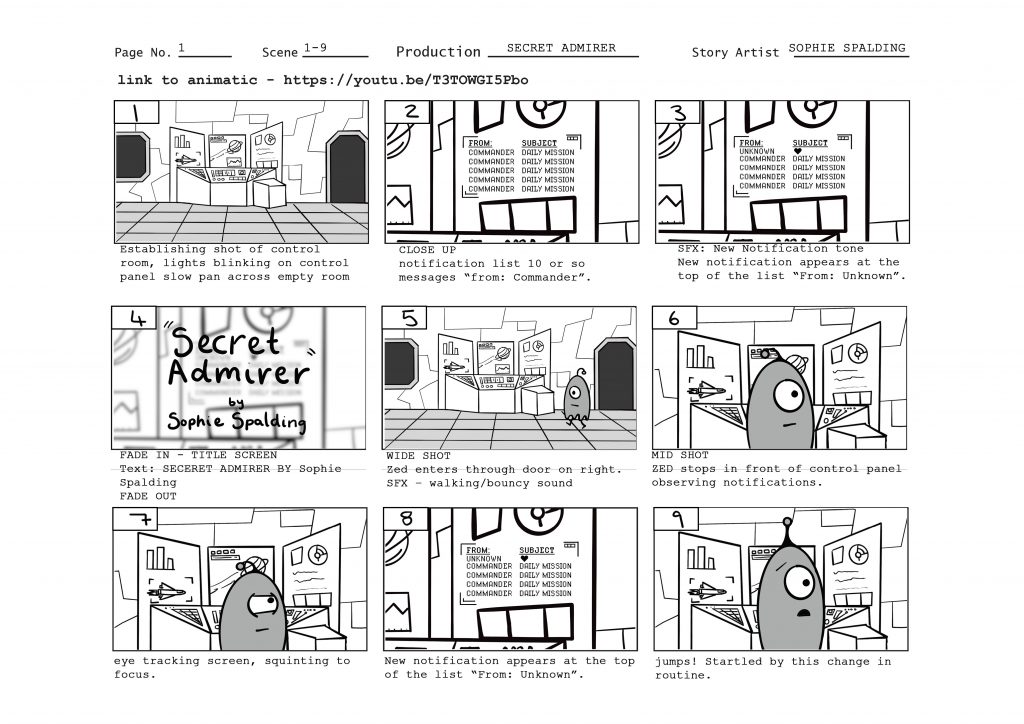 This work was created for the 2D animation module run by Fiona Stewart and Andrew McKelvey.  Thanks to Sophie for allowing us to feature her work.

We love the colours and hand-drawn style of year 2 DMID student Alynna Aquino’s “Puddles”,  she has really captured the spirit of a Scottish autumn day after the rain.    We’ve included some of her beautiful concept work below.  You can see more of Alynna’s work in her portfolio here – https://alynnaaquino.weebly.com/ 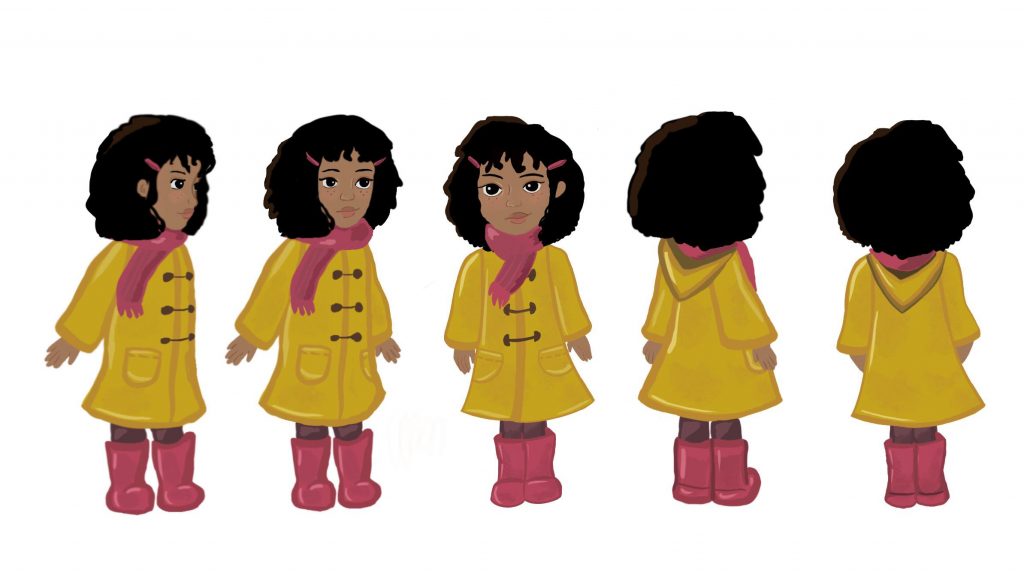 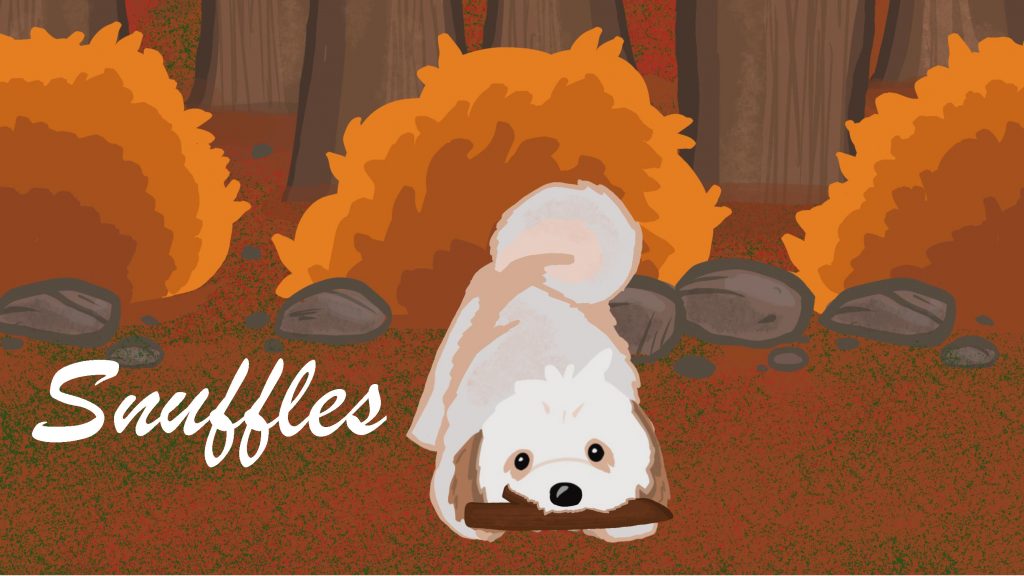 This work was created for the 2D animation module run by Fiona Stewart and Andrew McKelvey.  Thanks to Alynna for allowing us to feature her work.

Our year 2 DMID student, Jonathan Wood, has created this animation that explores what “smart” home gadgets might get up to when we are out.   We loved the way he managed to get personality into the inanimate objects- as you can see from some of his character and background designs below.  You can see more of Jonathan’s work on his portfolio – www.jonathanwood.uk 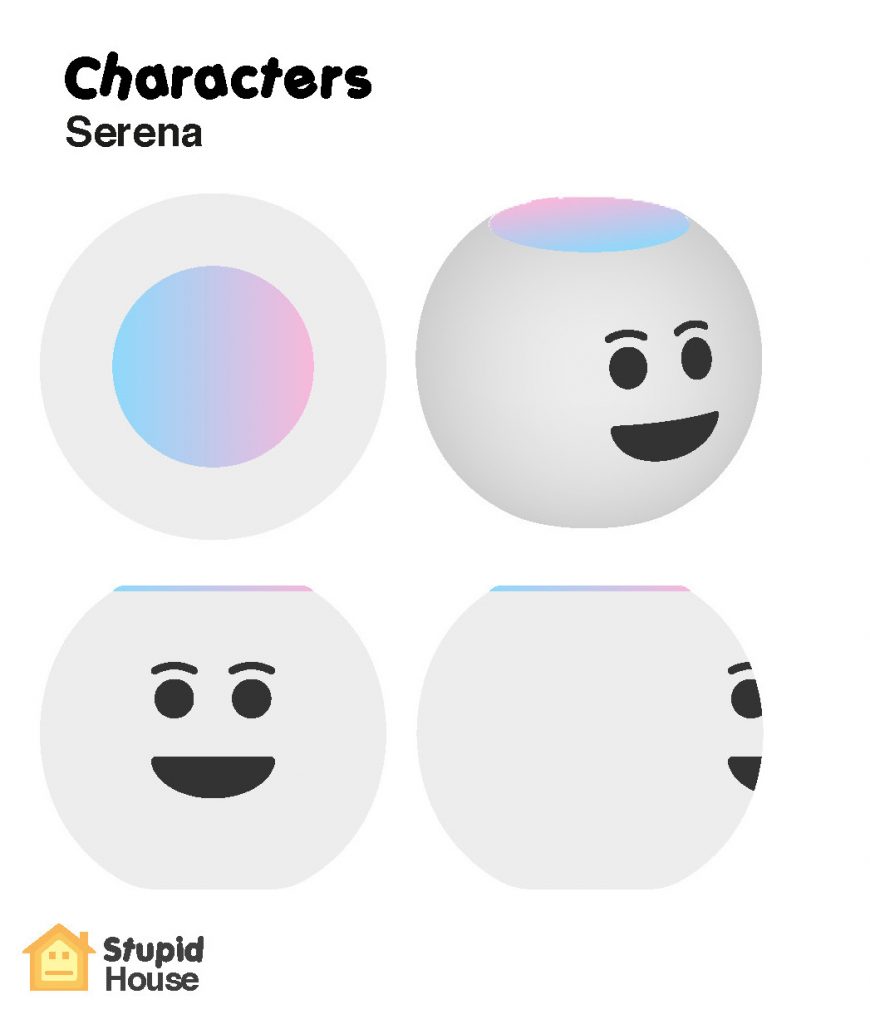 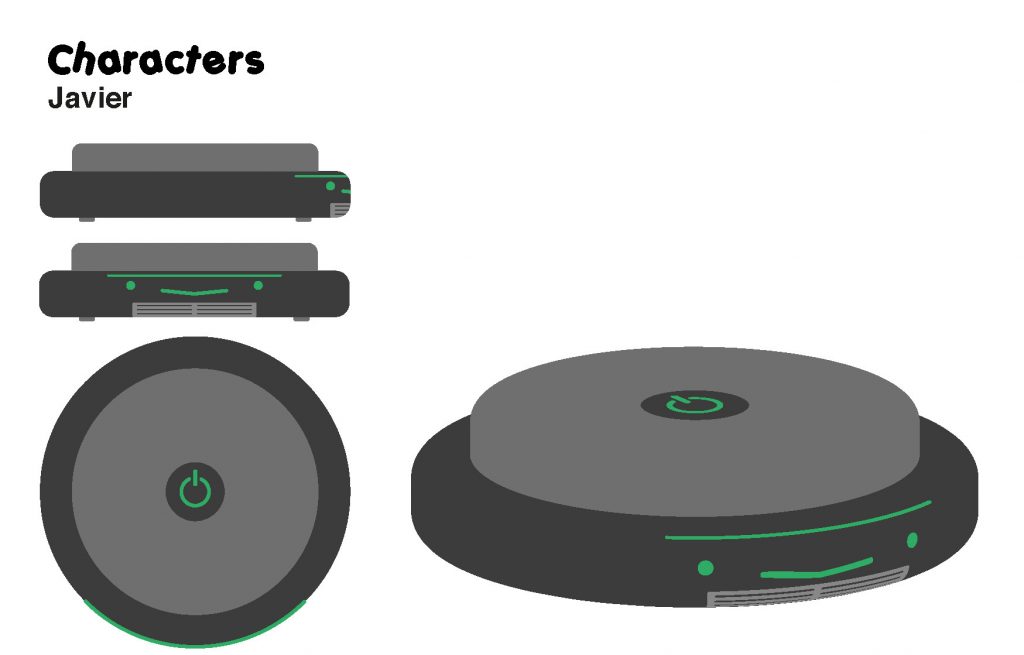 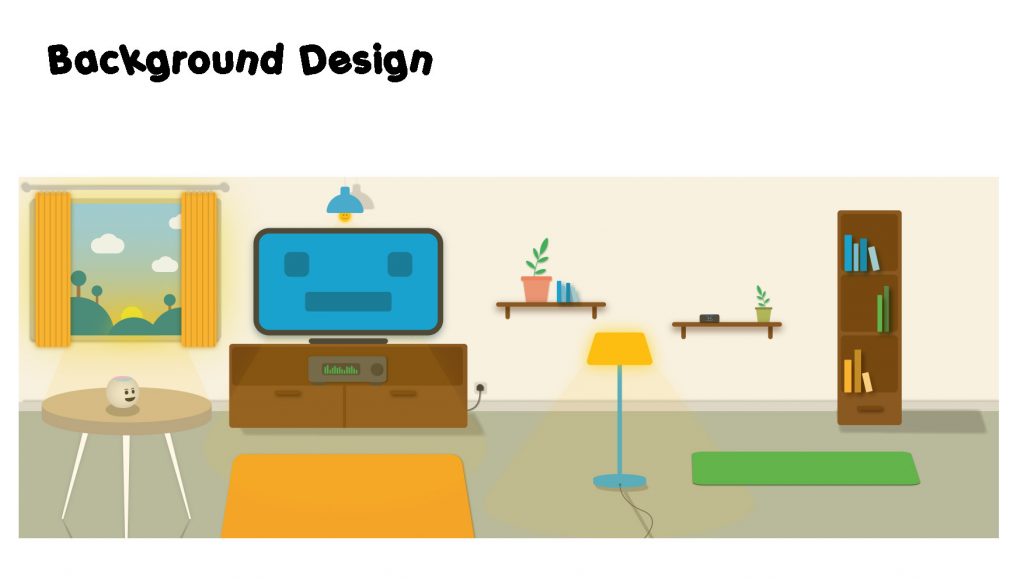 This work was created for the 2D animation module run by Fiona Stewart and Andrew McKelvey.  Thanks to Jonathan for allowing us to feature his work.

This animated short is by year 2 student Álvaro de la Torre Lázaro, who is studying Marketing with Digital Media.   We loved the soft colours and use of texture as well as they way characters have so much expression even although they are made of simple shapes – as you can see in the storyboards and character concept below. 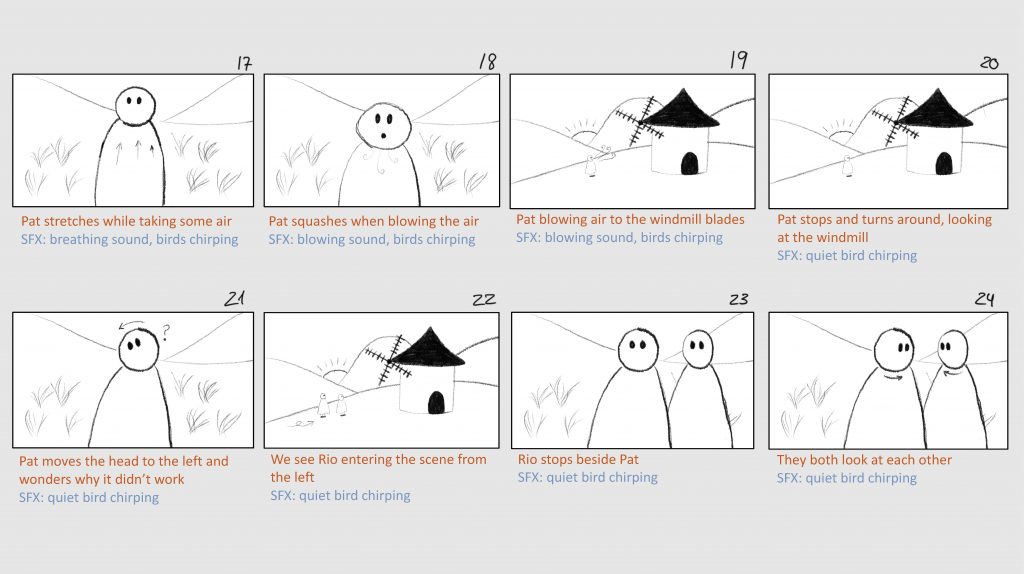 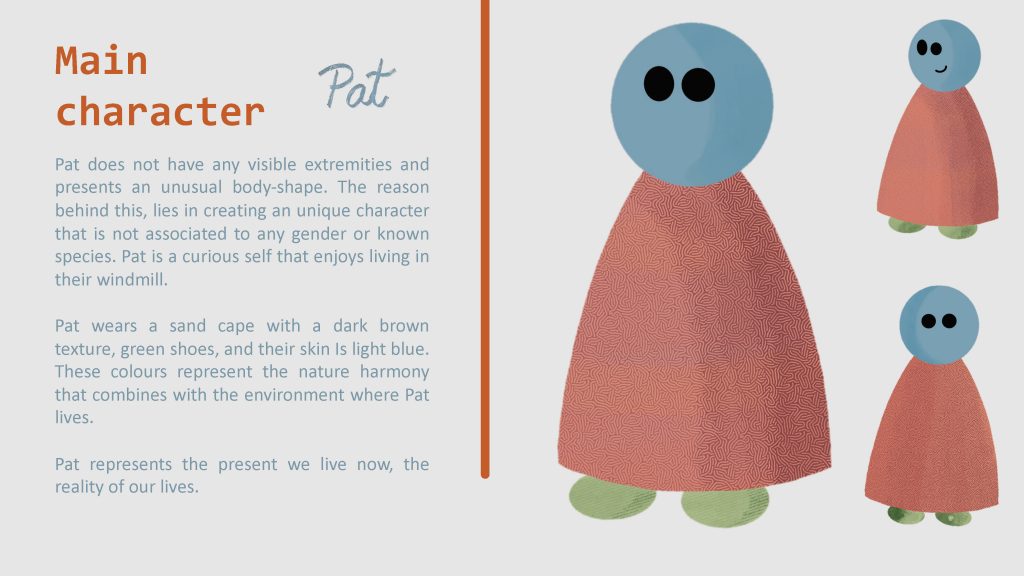 This work was created for the 2D animation module run by Fiona Stewart and Andrew McKelvey.  Thanks to Alvaro for allowing us to feature his work. 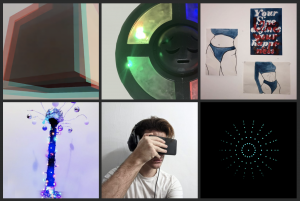 Sentient is a printed book and online exhibition created by our year 3 and 4 students for their Creative Technology module led by Dr. Tom Flint.  We normally have a gallery exhibition, but this year the students have managed to find alternative ways to exhibit their work.  They say “We have had the opportunity to work on a number of incredible projects that we’re pleased to share. Not only do we enjoy showcasing our work, but also sharing details about the creative process behind each project. We want you to fully experience our projects, so please sit down, relax and enjoy.” 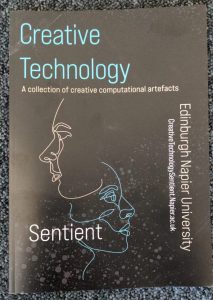 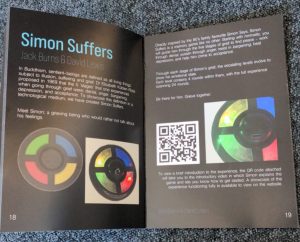 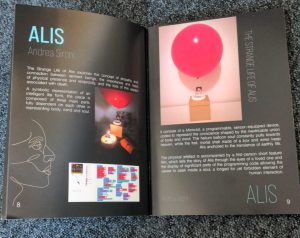 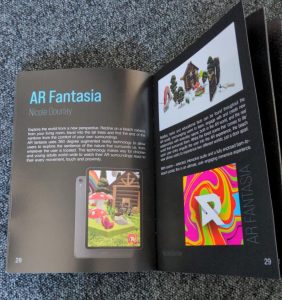 Many thanks to the students and to Dr. Tom Flint for allowing us to share their work.