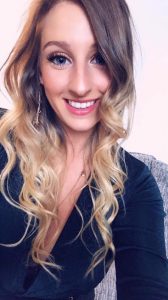 I graduated from Edinburgh Napier in July 2016.

I started studying Psychology with the goal of becoming a teacher, however, studying the Forensic Psychology modules inspired me to pursue a career relating to Psychology and those who offend.

After studying at Napier, I completed an MSc in Forensic Psychology at Glasgow Caledonian University (GCU). Following my year at GCU, I went travelling around Asia and Australia for a couple of months. I then came home and searched for jobs relating to Forensic Psychology while working part-time at a jeweller.

I found it extremely difficult to gain employment in the field but eventually found a role within Criminal Justice Social Work. I was given an agency contract working in Throughcare which involved supporting and supervising high-risk offenders serving long term sentences. A year after starting this position, I secured a permanent contract working with those serving Community Payback Orders.  While gaining this experience, I remained motivated to work within Forensic Psychology, however, job opportunities were rare.

I was eventually offered an Assistant Psychologist position with the Scottish Prison System at the start of this year; however, they could not guarantee opportunities to progress within the field. After wishing for this job opportunity to arise, I realised that it did not reflect what I wanted in my career and declined the role. I then realised that I had developed a stronger interest within the field of Clinical Psychology and applied for several jobs with the NHS.

I have recently been offered the role as an Assistant Psychologist with the NHS due to start in September. This involves working in a severe personality disorder unit and provides the opportunity to gain experience within the field of Clinical Psychology. It is also based in a prison which links to my interest in Forensic Psychology.