It is quite common for species with similar timber properties to be lumped into a commercial “species combination” for trade  (the species are not differentiated – they are sold and processed together).

“British spruce” is an example of a species combination.  EN14081-1 (and the UK National Annex of EN13556) list it with marking code WPCS.  It consists of two spruce species:

It is not, strictly, limited by definition to timber grown in the British Isles (UK and Ireland) but this is what is is intended for, and why the species combination name implies the origin.

Over the total area of spruce forests in the British Isles, approximately 92% of these forests are comprised of Sitka spruce, with the remaining 8% consisting of Norway spruce. The exact mix depends on the location, but you can be pretty sure that when you buy “British spruce” what you mostly have is Sitka spruce, with some Norway spruce mixed in.  It is not known how the species compare when grown in the British Isles (other than knowing that they are have very similar properties) but David Gil-Moreno’s PhD project is shedding some light on that.

There is potential for other spruce species to be grown for timber in the British Isles (we are currently researching Serbian spruce, Picea omorika) but these would not be included in “British spruce”, despite being spruce grown in Britain – the species combination is, specifically, Sitka spruce and Norway spruce. 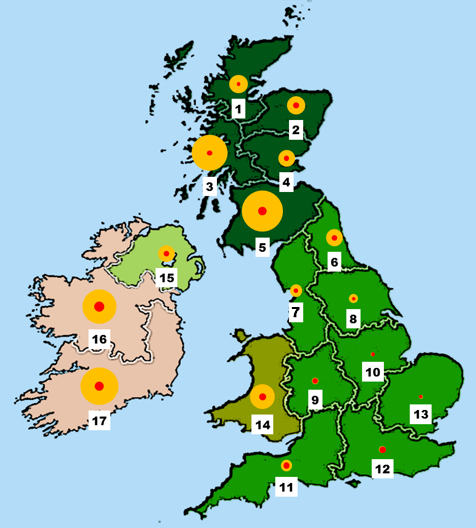