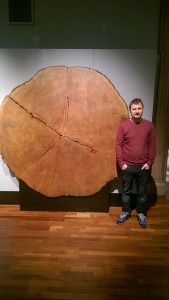 Steven joined Edinburgh Napier University in 2014 where he works as a Research Fellow within the Centre for Wood Science and Technology. Prior to joining Napier, he spent a number of years working in freight forwarding and also worked as an environmental consultant for a large engineering firm and spent time working within the carbon dating facility at the Scottish Universities Environmental Research Centre (SUERC).
He graduated from the University of Glasgow in 2009 with a First Class BSc Honours in Environmental Chemistry and was awarded a Ph.D. from The University of Glasgow in 2014 investigating what effect a changing climate could have on the quality and quantity of wood produced and how this varies throughout The UK.
Steven is currently involved in a number of projects including timber grading and investigating the properties of alternative species of tree growing in the UK.