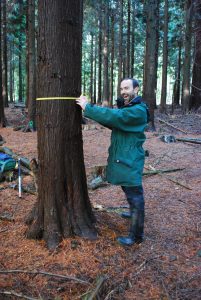 We are delighted that PhD student, David Gil-Moreno, has won a prize as coauthor of the article “The Redwoods and red cedar” published in the October Quarterly Journal of Forestry.  Western red cedar is one of four alternative conifers included in David’s research project – which is thanks to the financial support of the Scottish Forestry Trust, Forestry Commission Scotland and Cyfoeth Naturiol Cymru (Natural Resources Wales).

It appeared in the October 2016 issue of the Quarterly Journal of Forestry and is part of an RFS Species Profile Project looking at tree species with potential for wider use in Britain to enhance forest resilience. It can be read in full at www.rfs.org.uk/learning/ by following the forestry knowledge hub/ species profile links.

The judging panel was made up of RFS members. One judge described the articled as:

“Very relevant in the 21st century for alternative conifer species on a wide variety of sites. Not too technical, nice and easy to read.”

Another said: “Given the challenges foresters face today, there is a real need to be considering alternative tree species from outside the UK … The article is scientifically rigorous yet very readable, well illustrated and stays focused on the species’ suitability for use in the UK without being tempted to branch out into folklore.”

For western red cedar and coast redwood, the authors concluded: “The most likely scenarios for deployment will be in mixed oceanic stands, managed under continuous cover systems, also including Sitka spruce, Douglas fir, Abies firs and western hemlock. Pure stands and clearfell-restock silviculture may also remain relevant under some circumstances.”

However, they added: “There is limited evidence of the likely performance of giant redwoods within British forests.”

Well done to all the authors.

The Royal Forestry Society (RFS) is an educational charity and one of the oldest membership organisations for those actively involved in woodland management.