We have a paper about the indicative structural visual grading potential of UK-grown beech in the 12th International Conference “Wood Science & Engineering in the Third Millennium” (ICWSE 2019). This conference is hosted by the “Transilvania” University of Brasov, Faculty of Wood Engineering.

The paper submitted (and in the proceedings) has a typing error in one of the equations. Equation 7 should read:

This is corrected in the PRO LIGNO version.

Abstract
The paper presents the results of non-destructive longitudinal resonance (impulse excitation technique), and mechanical flexural testing, of a batch of European beech wood (Fagus sylvatica L.), grown in the United Kingdom. The material was largely free from visible defects and straight grained, having been visually appearance graded by the sawmill. The dynamic modulus of elasticity of original length boards is compared to density and global modulus of elasticity results from short lengths cut from a subset of those boards, tested in four-point bending about the minor axis. A method of weighting, based on the first mode wavelength, is shown to improve the correlation, partly accounting for variation within the boards, and the relative contribution to the resonance behaviour. The results are used to estimate the structural grading of the full batch and shown to be similar to results from previous small clear testing of UK-grown beech (within 5-10%). The relatively small number of boards from a single batch, from a single location means that the results are only an indication of potential quality, but they give confidence that further research should be done into the potential of UK-grown beech, especially for glued-laminated construction products, as has been done in Europe.
Key words: beech, non-destructive testing, acoustic methods, strength grading.

It appears that the stiffness is the limiting property, and that the timber could potentially be assigned to grade D35 or D40. However, since this is just one batch of timber, and a relatively small amount of testing that is not conducted in line with requirements for grading assignments (EN 14081-1 and EN 384), these numbers are indicative only. They do, however, compare well to existing visual grading assignments for beech grown in Germany, France and Belgium, but with slightly lower stiffness.

This paper is supported by the Forestry Commission England Forestry Innovation Fund grant FIFRDC-39-17-18 led by Immanent Associates and Edinburgh Napier University Principal Investigator Dr Ivor Davies. Additional thanks are due to East Brothers Timber and Grown in Britain for providing the timber, and Nicolas Igoe for making the non-destructive measurements. 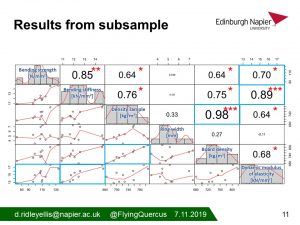