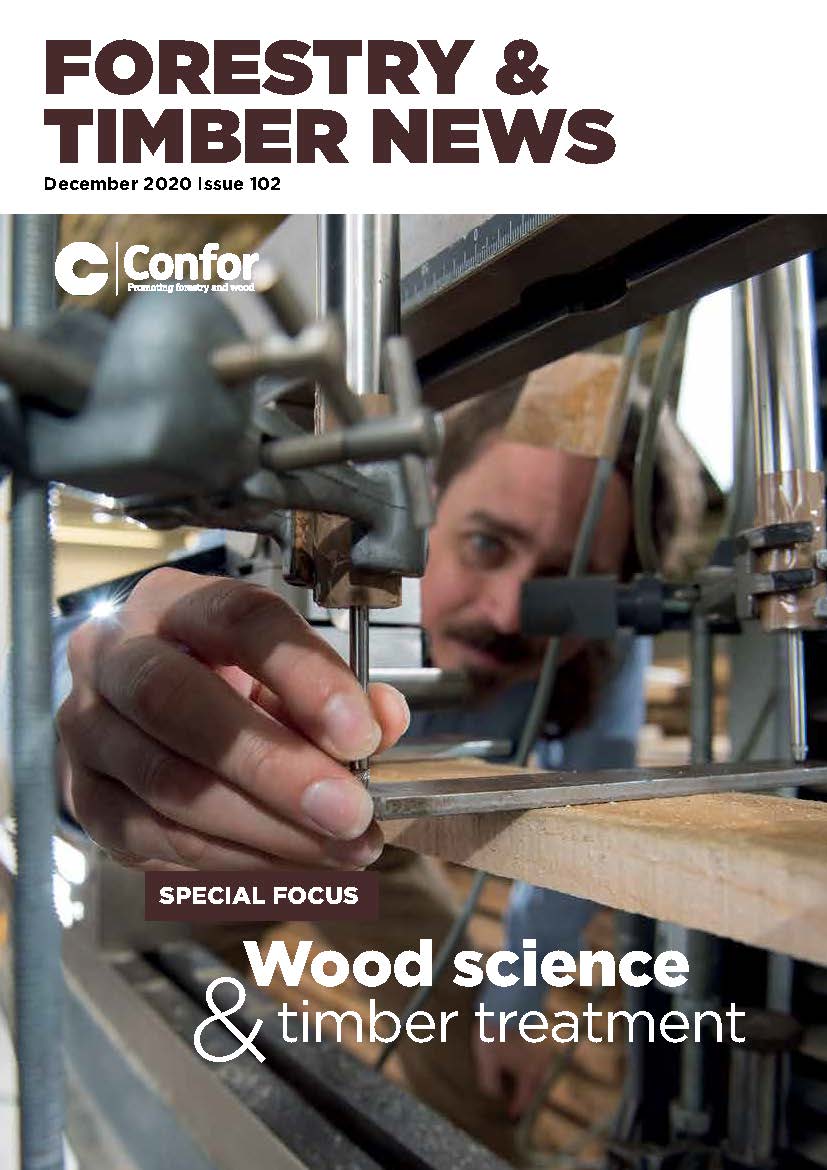 Perhaps you arrived here from the article on pages 38-40 the December issue of Confor’s Forestry and Timber News (currently for members only). If so, please be aware there is a typesetting error at the top of page 39. In the section heading it says the mean stiffness of British spruce is between 13 and 19 N/mm2. This should read between 7 and 9 kN/mm2.

There are lots of exciting things going on at the moment – such as the home-grown CLT demonstrator work with the Centre of Offsite Construction and Innovative Structures – making the construction news (e.g. here & here). But what about the “quality” of our home grown timber? Perception of its suitability is now more of a barrier than its actual suitability.

Thanks to the work of SIRT and allied projects at Edinburgh Napier University, and recent collaboration through the WoodProps project led by National University of Ireland Galway, a great deal of data has been collected about timber grown in UK and Ireland. The close involvement of industry, and Forest Research, has been a vital component of this – and none of this would have been possible without their help.

Here we will look at the suitability of this timber for construction. It is the market we most often talk about, because it is the one in most need of research, but it is not the only market. Wood for pallets and packaging, fencing, and fibre for panel products, is also essential for modern life – and these things don’t necessarily mean the sequestered CO₂ is not locked away for a long time either, once you take account of reuse and recycling.

For construction timber there are key properties that effect the safety of buildings; strength, stiffness and density. Density is important, since it determines connection designs, fire performance and self weight – although in the latter case we should quantify it differently.

There are other characteristics that affect the usefulness of the timber and non-structural performance (such as appearance, tendency to split, natural durability) and characteristics that we use to grade for the structural performance (like knots, ring width, and slope of grain). Of course, knots and ring width can be quality criteria in their own right – for example affecting the finish of the wood.

When visual strength grading, there really is not much other than knots, ring width and slope of grain that can be used to make grading decisions, but it is important to think of them here as indicators – separately from how they might be quality criteria in their own right. And it is also important to realise that the reason they are useful for strength grading might not be because they determine strength, stiffness and density – but rather that all these things are affected by how the trees grew. Things can be correlated without one being the reason for the other.

So, on to the most problematic thing that is said about home grown timber – especially our spruce: “It grows too fast, making it too low density, and unsuitable for construction”. This, very persistent, myth is a significant barrier to getting more home grown timber in construction, since it leads to perfectly suitable timber being rejected, and habitual over-specification. In reality, ring width, tree growth rate, density and strength are only loosely related. And because people repeat this myth a lot, we have addressed it several times before on this blog:

We have the most information about Sitka spruce, Norway spruce, Douglas-fir and larch (European, Japanese and Hybrid), and you can read a summary of the properties here. You can read about noble fir, western red cedar and western hemlock in this Forest Research publication. We have not done so much on Scots pine ourselves, but there is a Forest Research publication on that too, and the WoodProps project at NUI Galway has done some work suggesting that it would grade a little better than the spruce, but not as good as the larch.

For spruce, larch and Douglas-fir there are approved settings for several modern grading machines, but the Scots pine can still only be graded by the older bending-type grading machines.

For all of these species, the most influence on the properties comes from the forest management, site factors, and tree selection. This means that wood properties are not fixed, and can change over time. It is therefore necessary to keep a research eye on the most critical properties to ensure that they do not inadvertently reduce due to actions aimed at improving other kinds of timber quality. This is now one of the research actions of the SIRT project, especially for the spruce where foresters have successfully increased yields. It is a difficult matter to track changes in the properties over time, because test standards also change over the decades, but we think that the records kept by modern grading machines will really help with this.

But the bigger change in our resource will be coming from diversification of tree species in the forest, driven by resilience against pests, diseases and climate change, and by the public demand for prioritising the other functions of forests. So research is also needed to look ahead – to what we will do with the trees being planted now. The good news is that this need not necessarily mean big changes if species can be mixed successfully with the spruce. New opportunities will come with greater use of laminated wood products like CLT too, where the timber can be more variable and still be suitable for the purpose.

More will come about these other species, but here is a taster:

UK-grown Japanese red cedar lacks stiffness and has remarkably low density. This does not mean that it does not have its uses, where its low weight could come in handy such as studs in partition walls, or even super lightweight cross-laminated timber.

UK-grown Grand fir and Nordmann fir look like they also might struggle to achieve the usual UK market strength class, C16, with high grading yields. However, we have very limited testing data, and they are not so far off (so it could still be possible).

Pacific silver fir (and western hemlock mentioned above) look to be rather similar to the Sitka spruce and are strong candidates for blending in with the existing British spruce resource.

European silver fir and Serbian spruce look also to be C16, but their higher density than spruce makes them less suitable for a grading mix – although this could be possible with the right approach.

Birch and sycamore have good properties, but low density compared to the hardwood strength classes, and so they fit better to the C classes normally used for softwoods. Sycamore probably better than C16 and the birch looks very good (possibly C40) but we have very little data so this is only the weakest of indications. The UK does have some high quality beech too, but we have only done a small amount of research on that.