In this post I am building upon Dan’s earlier discussion of the misconceptions surrounding growth rate and wood density. This post extends the discussion to include virtually all wood species.

“Rate of growth” can be expressed as either changes in ring width or the speed of growth of the tree.  In this blog post we are only concerned with ring width.

In most cases there is little or no correlation between ring width and wood density. The only species where a relationship might – repeat might – exist are softwoods such as spruce and hardwoods such as the deciduous oaks. Confusingly, however, the relationship is not consistent between these two groups. In the former group fast growth sometimes produces low density timber whereas the opposite relationship can occur in the latter group.

Confused? Don’t worry you are not alone. As we shall see, many commonly held assumptions about growth rate and density are incorrect.

Most tree species form their wood tissue in growth increments which are correlated with annual or seasonal climatic changes. Wood formed at the beginning of the growth period is termed ‘earlywood’, while wood formed later is known as ‘latewood’. Earlywood is usually paler in colour and less dense than latewood due to differences in the type and thickness of conducting cells.

In tree species that form distinct growth rings there are three fundamental patterns of earlywood and latewood within the growth ring:

These patterns appear in both softwood and hardwood species although there is a difference in how they are manifested due to the contrasting anatomical structures of these two botanical categories.

Consequently, wood species can be divided into six groups (three softwood and three hardwood) on the basis of their growth ring characteristics when seen in a transverse cross section. The six groups can be illustrated as follows and are summarized in the table below. 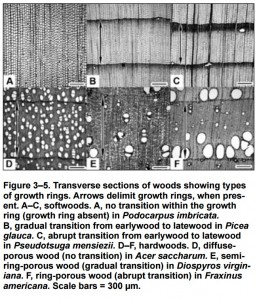 (From Chapter 3 of USDA Wood handbook: Wood as an engineering material)

Not all timber species neatly fit into the six categories listed above. Teak and hickory, for example, can be either semi-diffuse porous or ring porous depending upon the growth conditions.

If you want to find out more about these relationships, have a look at the following textbooks which should be stocked in most university wood science libraries: