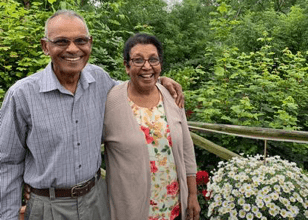 Worldwide, there are approximately 570 million smallholders who cultivate plots of land less than 5 acres in size (approximately 2 hectares).

Typically, these small farms are passed down through generations, and while they account for 84% of all farms, they produce around 30% of the global food supply.

Vulnerable to climate change, as their livelihood depends on the soil and water beneath their feet, smallholders also represent one of the world’s most underprivileged and marginalised groups.

The UN’s 1st and 2nd Sustainable Development Goals (SDG) spotlighted research that can support smallholders, who are critical in many parts of the world to help eliminate hunger and alleviate poverty. Through education on modern methods of farming, they can also play a significant role in building resilience to the impacts of climate change.

One smallholder from Trinidad in the West Indies is Ramgopaul Roop, MSc (Dist), MBA (Dist), and a Fellow of the Institute of Administrative Management (IAM) UK.

Ramgopaul (pictured with his wife Beena) was born into a modest family in 1947. Despite his parents’ inability to read or write, they dreamed their son would attend university. Aged 24, he earned his diploma in agriculture from the Eastern Caribbean Institute of Agriculture in Trinidad; but then he had to pause his academic ambitions to ensure his children could pursue theirs. He was working on the smallholder farm that, by now, he had inherited from his parents, and in parallel, he was working different jobs to support his family.

After learning how to use a computer, aged 60 – thanks to a role as a consultant in Soil and Water Management – did he decide he was finally ready to go after his dream and study for a degree from a reputable university.

So, when most people choose to retire, Ramgopaul saw an Edinburgh Napier University ad online. At aged 66, he was accepted into the Edinburgh Napier online MBA programme, taking advantage of the ability to study one module per semester. That ensured he could manage his academic workload without neglecting his farm. Throughout his studies, in different ways, he was supported by his wife, sons, daughters-in-law, grandchildren, and even the family dog, Coco, who all wanted to ensure he would excel and fulfil his lifelong dream.

Ramgopaul graduated with an MBA with Distinction in 2017 at age 69 and immediately enrolled in an online MSc in Business Management (Human Resource Management). Two years later, in 2019, at age 71, he graduated again with another Distinction.

For the past three years, Ramgopaul has been researching how smallholder farming can become more sustainable for families and the planet. He is now involved in six research publications, taking the lead in four and co-authoring two papers. His research focus and personal mission align with the UN’s 1st and 2nd SDGs, namely, to eliminate poverty and hunger: and he firmly believes that supporting smallholders is an answer to both challenges.

His work is helping to educate smallholders on how to adapt the management of their land to climate change, which is crucial for continuing to put food on many tables during this time of climate stress. In addition, he is teaching smallholders how to run their farms on proper business guidelines.

These strategies are helping to create an unprecedented revenue stream for many underprivileged families, which in turn helps make smallholder farming more attractive for younger generations to take over, once their parents retire.

The Roop family proves that one can achieve anything with hard work and family support. The family of Ramgopaul and his wife, Beena, consists of three children (sons), two older sons are medical doctors, and his youngest is an engineer. The family also has a 1-year-old Husky puppy, Sadie, who was adopted after Coco’s passing last year. Ramgopaul’s youngest son and his wife, an environmental scientist, and their 7-year-old son, recently took over the family smallholding business.

Now aged at 75, when we ask Ramgopaul what drives him to still wake up at 5 am every day to continue with his research, his answer is simple: Sharing his research and his hard-earned first-hand traditional knowledge on managing smallholder farms efficiently and sustainably. He wants to highlight the crucial role of smallholders in our ecosystems and support them as they work to improve their quality of life and mitigate climate change impacts worldwide.

During his 50-plus years of professional career in agriculture, he received several awards, including the 2001 National Agricultural Entrepreneur of the Year in Trinidad. In 2021, he received from the Inter-American Institute for Cooperation on Agriculture (IICA) the Hemispheric Soul of Rurality Award of the Americas for advocating agricultural resilience over the past 25 years, emphasizing efficient water and soil health management.

It is no surprise that Ramgopaul also advocates the importance of lifelong learning. He still looks for ways to stimulate his mind and suggests others do the same: living proof that this is not only possible but also enjoyable, exciting, and potentially full of impact for future generations.

At age 75, he is still seeking funding to pursue his PhD in smallholder farming as a backbone for food and nutrition security to eradicate hunger and poverty.