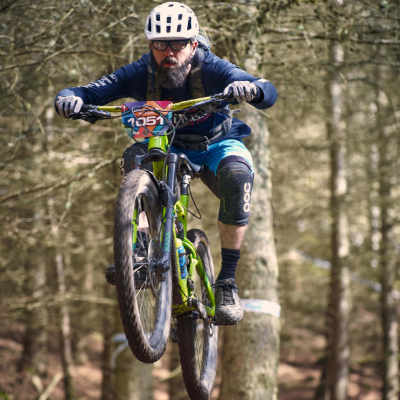 In 2023, Scotland is to host the Cycling World Championships, a two-week extravaganza that will bring together 13 international competitions in one country for the first time.

This inaugural mega event will provide an outstanding opportunity to showcase the Mountain Bike Centre of Scotland (MTBCOS) research group and a new Innovation Centre at Innerleithen, in the Scottish Borders.

Edinburgh Napier University’s Professor Geraint Florida-James is playing a key role in establishing the new innovation centre – which marks an important milestone for the sport of cycling at home and worldwide. An applied researcher who is passionate about sports science and cycling, Professor Florida-James has been involved with the biking industry for nearly twenty years, also coaching athletes for the Downhill and the Cross-Country World Cups, as well as Professional Enduro Racers.

The MTBCOS is a project that started in 2014, with Edinburgh Napier University working in partnership with Scottish Enterprise and the Scottish Cycling. Its role has been to help grow a Scottish cycling industry, with relevant research and help businesses take advantage of one of the country’s fastest-growing sports. The group provides support with market research, developing, testing, and launching new products.

The success of the project caught the attention of the Scottish and UK Governments and raised the profile of the sector internationally. As a result, with an additional partner, the South of Scotland Enterprise, the Centre has been fundamental in securing £19M of Borderlands Regional Growth Deal Funding to purchase the Caerlee Mill in Innerleithen, an old textile mill that has been out of use since 2013. Professor Florida-James emphasises that partnerships such as these are key for the Centre’s continued success.

Also included in the Borderlands Project is the first mechanical lift-assisted Bike Park in the Northern Hemisphere, which will be with a short ride of the Mill. Once renovated, the Mill and the surrounding world-class bike tracks will serve as an innovation site for the cycling industry ­- led by Edinburgh Napier – where new products can be developed and tested. In addition, the Hub will also explore supply chain issues and can connect local entrepreneurs with international audiences.

Professor Florida-James says, “we expect huge international interest around the 2023 Championships, which will help more companies become aware of the research and development potential here, and the potential to reshore some of the cycling industry to Scotland”.

The Centre has equally been supporting internal partners within Edinburgh Napier who are involved with mental health and wellbeing research, to identify ways cycling can boost these issues in Scotland and beyond. Various schools within the University will combine their research with the Centre through the new Innovation Hub, recognising the opportunities cycling presents for future health, wellbeing and economic development.