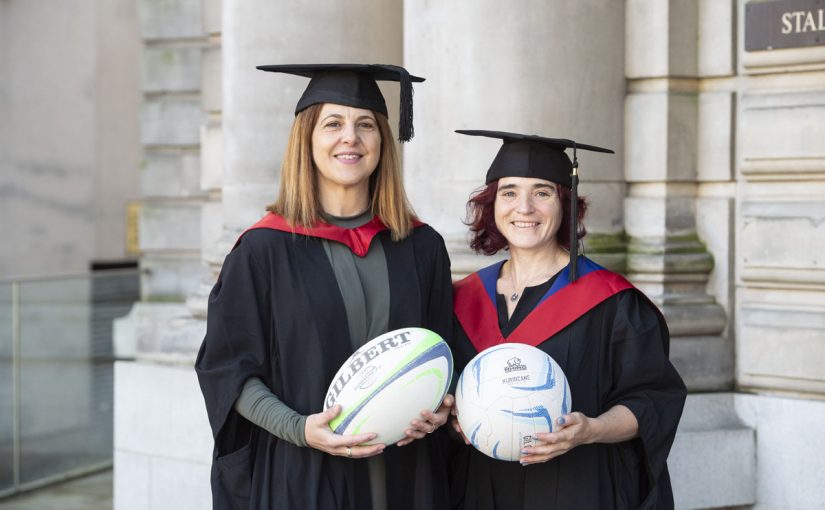 Christina Barrow and Clare Daniels are the first to complete the world-leading master’s degree for referees and umpires.

Christina Barrow and Clare Daniels are the first to be shown the red scroll after completing the world’s first taught master’s degree of its kind – designed specifically for referees and umpires.

Christina took on the three-year programme with ENU alongside her work as International Officiating Manager at World Netball, a role she has achieved after only getting involved in the sport at the age of 30.

Clare undertook her studies while working as a Performance Reviewer and coach for match officials in rugby union’s Professional Group of Match Officials Team, following a successful refereeing career on the pitch.

Both carried out pioneering research as well as completing the bespoke modules on skills including decision making and communication. They have been presented with their degrees during a graduation ceremony at the Usher Hall in Edinburgh on Wednesday 26 October.

As part of her research into the challenges faced by female match officials, Somerset-born Clare compared the world of sport with sectors like the fire service and STEM industries.

She said: “Many of the challenges female referees deal with are very similar to those women face in industry and the corporate world. I found there are a lot of things we can learn and share from other sectors.

“Before I looked at academia and thought it was nothing to do with me, but when you dip your toe in the water you see there’s a wealth of knowledge that can help make us better. I think it’s hugely underused.

“When I left college I went straight into work, but I felt that at this stage in my life I have a much more curious attitude and a desire to learn. My mindset was right.

“I’ve become more curious in how we could do things differently, asking more questions and not just accepting the way things are done. It brings a fresh perspective.”

Christina, from Chorley in Lancashire, whose research looked at wellbeing support for officials, said: “The course seemed like a perfect fit. It’s allowed me to find out things that will help other officials in netball.

“It’s been challenging – you have to dedicate yourself – but what you gain is definitely worth it. Personally, you achieve great things.

“To be an umpire, or a referee, you have to be resilient. Netball officials are managing themselves well, but the support they get could be improved. My research found that help was often unstructured.

“It’s given me a platform to understand the problem so I can solve it and represent our officials better. I think it’s also a springboard to maybe expand into other sports and see what we can learn from each other.

“I see research as a jigsaw puzzle – you’re just looking to add more pieces. Sometimes you don’t find the pieces you want, or you need to shuffle them around, but it all helps add to the picture.”

Dr Duncan Mascarenhas, Associate Professor and Programme Leader for MSc Performance Enhancement in Sports Officiating at Edinburgh Napier University said: “It’s so exciting, I’m so pleased for them. They’ve put in the hard yards. It’s a big statement for the university that we’re able to upskill these high-profile experts in their fields.

“These two students are pioneering the programme in very different contexts – Christina as an administrator and leader in netball and Clare as a former referee and now a referee coach for rugby.

“They’re trailblazers and great role models for others coming through.

“All the modules in the programme are tailored to the students’ needs. It means we’re dealing with areas of sport which have never really been tested.

“Officiating research is relatively young. It effectively began in the eighties but only really started growing in the late nineties. There’s so much that’s still unexplored and it’s an exciting area to be involved in.”