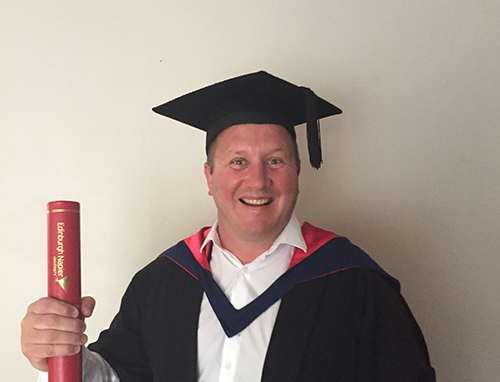 Ben Fisher may not be the most recognisable name in the sport of rugby but he may well be one of the most influential. After a successful career playing for Boroughmuir RFC and Edinburgh Rugby, Ben took his experience and knowledge to the training grounds, where he has coached Scotland U16, U18 and U20 teams, as well as working as an Academy Manager and Coach for Scottish Rugby for 10 years. While Ben has been instrumental in the development of Scotland’s 2019 Rugby World Cup squad he’s now changed his navy blue colours for an “All Black” one. Upon graduating from Edinburgh Napier University in 2018 with a Master’s degree in Sports Performance Management, Ben was offered the role as a High-Performance Talent Development Manager for the famous New Zealand national rugby union team, also known as the All Blacks.

Ben’s new position within the All Blacks setup sees him managing the 14-strong Provincial Union Academy structure across New Zealand.  He said, “We have around 400 players in those academies, aged 18 – 21. I work to ensure the players’ holistic development is catered for and that the curriculum delivered in the academies, and personalised player development plans are all of a high standard. The aim is to ensure a steady supply of high-quality professional players; great people, and future winning All Blacks.” Other parts of his role see him perform ambassadorial duties, as he recently embarked on a trip to Japan, ahead of the Rugby World Cup, to represent the All Blacks on promotional duty.

While the All Blacks are currently in Japan, looking to retain the World Cup for a third consecutive time – a feat that has been unrivalled so far – Ben believes his time at Edinburgh Napier has prepared him for such a high-profile position. He said “I chose to study at Edinburgh Napier University as it offered an excellent programme that was tailored to fit the needs of my learning. The university is very supportive of Rugby in general and its collaboration with Scottish Rugby is excellent. They help develop coaches and players in Scotland via the Edinburgh Academy partnership, the UKSS Level 4 coaching course, and also two Super 6 teams.

During my time at university, I learned a lot of new skills and the course also reinforced a lot of the things that I was doing. Critical analysis and reflection skills were well practised, to dig deep into what I do as a practitioner and why. As a coach, you take on a wide range of roles and the course helped to broaden my understanding of sports psychology, pedagogy, leadership and talent development environments. It was excellent to be able to talk and share experiences with other students and the relationships I formed through my research helped to open my eyes to new ideas and gave me confidence in my own coaching behaviour. This has now given me the confidence to challenge current practice based on what I learnt in the course and the experience I gained in my research.”

After many successful years in Scotland, Ben is now back in his native New Zealand, with his family, a globally recognised Master’s degree, and a highly sought-after position at one of the most successful sport squads of all time. So, what would he recommend for anyone who may be interested in following a similar path? “Experience. Gain as much experience as possible through working, but also volunteering in your community.  Learning doesn’t stop: so listen, read, watch and most of all ask people about what they do and why. Don’t be afraid to share your ideas. The more you share, the more the ideas will grow & develop and refine.”