The shared connections that link a springbok called Nancy, the French town of Marseilles and warrior dancing to Scotland and the Great War (1914-1918) on first inspection may appear incongruous. Yet Stuart Allan and David Forsyth illustrate in their new work, Common Cause: Commonwealth Scots and the Great War, how these seemingly unexpected ties are in actual fact part of a wider and deeper story of the Scots diaspora and their experiences during the First World War. Allan and Forsyth, both senior curators at the National Museum of Scotland, joined chairperson Susan Mansfield and an eager audience in the ScottishPower Studio Theatre at the Edinburgh International Book Festival, to discuss the relevance and meaning behind their current work.

The book is approached from the perspective of museum curators with emphasis placed on visual and material cultures. Identifying highly symbolic objects and artefacts, Common Cause explores the complex themes of identity, migration and conflict. Crucially, the objects lead the book and according to Allan proceed with them. With great skill and insight, the authors captured the attention of the gathered audience to demonstrate that behind a series of outwardly conventional objects the cultural background to the politics of the British Empire during this formative period could be uncovered. A case in point is the aforementioned springbok, Nancy. Nancy was gifted to the South African Scottish as the mascot for the newly raised brigade. When the 4th South African Infantry entered Marseilles, bedecked in kilts as they played the bagpipes and drums, the little springbok trotted in front of the unit as they marched into the French town. Against the odds Nancy survived to see the end of the War and after her natural death was preserved to become a relic of the brigade’s military heritage. While remarkable such a little creature could survive in hostile conditions, the real significance of this mascot lies in its symbolism.

The 4th South Africa Infantry were raised by an emigrant Stirlingshire Scot, Sir William Dalrymple, a mining magnate. Dalrymple ensured that the Scottish nature of this newly formed brigade would be apparent to all who encountered them by adopting traditional Highland dress, bonnets and establishing a regimental pipe band. However, a South African identity was also made manifest through other expressions that began to intertwine with the Scottish traditions of the brigade. The springbok, native to South Africa, is a statement of South Africa identity and at this time of the imperial nation of South Africa. Moreover, the extraordinary photograph that adorns the cover of the book captures the brigade performing with gusto – in kilts and bonnets – an African warrior dance. By looking closely at the representation behind photographs, mascots and other objects the authors highlight the pluralistic identities that informed the Scots aboard that were of a cultural, national and military nature.  From a material histories perspective, Common Cause pinpoints the tensions between imperial, national, regional and local identities that were emerging under the impact of the Great War within Britain and in the wider Commonwealth of nations.

Allan and Forsyth underscored to a receptive audience the global reach of the Scottish diaspora by articulating the number of those involved, the scale of the conflict and the legacy of the Great War upon Scotland and beyond. Recalling the photograph of the 4th South African Infantry previously mentioned, this picture was projected onto a large screen so that it could be clearly seen by the entire festival audience. The impact of this enlarged visual image brought home the tragedy of war. The young men captured in this shot were full of life, expression and vigour as they animated the air and kicked up dust from the ground but as I continued to look closely at this projected image I couldn’t help but reflect that some of those souls would not return from conflict. It was a poignant reminder of the utter catastrophe of war. With that David Forsyth read aloud the Canadian-Scot John McCrae’s poem ‘In Flanders Field.’ 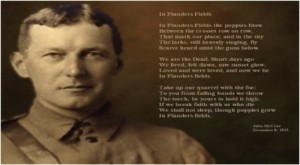 Against this context McCrae’s reflections can viewed as a counterpoint to the work of Siegfried Sassoon and Wilfred Owen The work of the latter two poets will be discussed this Sunday, the 24th of August, at an event organised by Edinburgh Napier University and hosted at the Edinburgh International Book Festival for those interested in war poetry and the Great War (see link: https://www.edbookfest.co.uk/the-festival/whats-on/the-poetry-of-war). The accompanying exhibition to Common Cause: Commonwealth Scots and the Great War can be seen at the National Museum of Scotland, Edinburgh, from the 11th of July until the 12th of October 2014 (http://www.nms.ac.uk/national-museum-of-scotland/whats-on/common-cause/ ). I would sincerely recommend Common Cause, the book and the exhibition, to anyone interested in this crucial period in Scottish, British, Imperial and Global history.