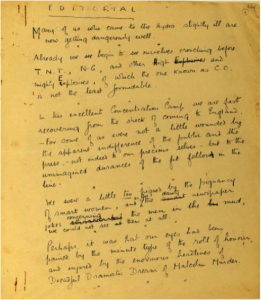 ‘Many of us who came to the Hydro slightly ill are now getting dangerously well’, observed  Wilfred Owen, writing in the Hydra magazine on 1 September 1917. The opening line of Owen’s editorial for the Craiglockhart Military Hospital publication explicitly captures the precarious situation convalescing soldiers found themselves in. Recovery was a pyrrhic victory as a return to health meant a return to the front line.

On Sunday evening at the Edinburgh International Book Festival, a full audience attended Edinburgh Napier University’s ‘The Poetry of War, Portraits of the Patients of Craiglockhart’ event to explore the lives of returning soldiers and officers scarred from the theatres of war. The curator of the war poets collection at Craiglockhart campus, Catherine Walker and historian Allan Burnett, took to the stage to share their expert knowledge of this period with the assembled audience. They were also joined by guest speakers who read extracts from the literary works of Wilfred Owen and Siegfried Sassoon. Walker recounted the history of the Craiglockhart building noting prior to its incarnation as a military hospital in 1916, it was in fact a hydropathic spa for the ‘worried wealthy’. In later life, the building was also a convent of the Scared Heart for the purposes of teaching and training. However, the central focus of the event was to explore the activities that occurred when the building was used as a military hospital and the daily environment of its patients.

The birth of the Hydra magazine can be seen as a product of this environment. The aforementioned Hydra was published in 1917 and used as communication channel for recovering patients to keep up-to-date with all the activities that were occurring in and around Craiglockhart. This ranged from sporting victories and competitions in tennis, bowls or croquet as well as keeping patients abreast of news from the debating club. Moreover, the publication reached out to the wider community (friends and families of patients) to allow them to participate and remain informed of events at the hospital.

The medical fraternity of Craiglockhart, Dr William Halse Rivers and Dr Arthur Brock, were influential in creating the conditions that allowed the Hydra magazine to emerge. Rivers, who treated Sassoon, adopted a ‘talking cures’ approach. Meanwhile Brock employed ‘ergo therapy’, a working cure in which he attempted to reconnect the damaged man back to the environment he would know and recognise. The two methods complemented one another. In the case of Owen and Sassoon, the creation of a hospital magazine allowed the men to engage in creative writing as a cathartic therapy; whilst it also reconnected the men as wordsmiths to an activity they were familiar with and practiced. The publication allowed the men to reflect upon and articulate their experiences of the First World War to produce some of their most notable poems and become a defining voice in twentieth-century war poetry.

Burnett attempted to give wider background to events occurring on the western front in 1916 but mainly spoke about the effect of war at a regional level, specifically the bombing of the Grassmarket in Edinburgh on 2 April 1916. While Burnett may have side-stepped the original question asked by the chairperson with regards to the international developments, he nonetheless painted a vivid picture of the consequences of war upon Scotland and her people both at home and at the front. Against this context the riches of the archived collection at Craiglockhart are further underscored. The manuscript material, particularly the Hydra magazine, captures a snapshot of the impact of the Great War on the Edinburgh community. If you wish to visit the war poets collection details can be found by clicking this link: http://www2.napier.ac.uk/warpoets/.

The following photo shows David Jarman and Jane Ali-Knight of Edinburgh Napier University, with Elspeth Frew, in attendance for the event. Article contributed by Aisling MacQuarrie. 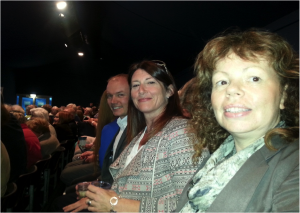 2 thoughts on “‘The Poetry of War: Portraits of the Patients at Craiglockhart’ – 24 August 2014 (article two)”