As the Edinburgh International Book Festival drew to a close for 2014, one of the highlights of Edinburgh Napier’s involvement took place on a sunny Sunday evening. Having heard mention of the Craiglockhart War Hospital, Siegfried Sassoon and Wilfred Owen in various talks during the Festival, it was fitting that the Edinburgh Napier University sponsored event brought these themes to the fore. A packed audience gathered to hear about life at the hospital, the treatments and practices of the institution and the artefacts and archives which remain. On the stage was Alan Burnett (author of The Story of Scotland) and, archivist at Craiglockhart, Catherine Walker. 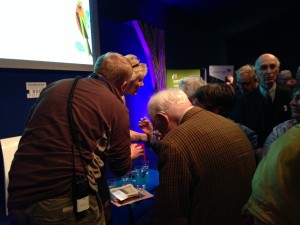 Over the course of an hour the packed audience was introduced to the history of Craiglockhart (first a hydro hotel, later a convent), the medical approaches of Dr Rivers and Dr Brock and some other connections between Edinburgh and the Great War. This latter point touched on Edinburgh-born Earl Haig, and the aerial bombardment of the Grassmarket that was news to many in the tent!

At the heart of the event were copies of Hydra, ‘The Magazine of Craiglockhart War Hospital’. Two copies of the magazine were recently brought to Craiglockhart and added to the university’s collection. Catherine W explained how the magazine was both a way to share news and a forum for discussion. Topics of the day ranged from the activities of the debating and sports societies, to the progress of women’s suffrage. There was an element of self-censorship at times, avoiding anything too controversial or revolutionary.

As was stated by Alan B, the commentary and poetry that found its way into these pages has ‘helped shape our image of the war’. He was keen to stress that it was written from officers’ perspectives, that Craiglockhart was a place for the select few, who were being given some of the best care available. Yet these were also men who formed part of the office class, contending with the stress of having to live up to the expectations that accompanied their role in life and the armed services. The concern for some was that they risked becoming ‘dangerously well’ and thus were flirting with being sent back to the front.

The Book Festival event was further illuminated by several readings, taken from the magazines and performed by young actors. To an extent they and other such references brought home the contrast between the relatively mundanity of Edinburgh life and the experiences of war that had affected these men so. We also heard a nurse’s poem, reflecting her lived experience of growing up at this time and defying standard expectations of her place in society. In line with many of the events to have taken place in the Book Festival’s ‘Words and War‘ this exploration of the Poetry of War was a window onto a tumultuous time for the men and women of Edinburgh, Scotland and Europe.

Ahead of the main event, as part of a reception hosted by the Principal of Edinburgh Napier University, a small audience was privileged to hear a few melodies played out on the ‘Wilfred Owen Violin‘. This instrument has recently been made from freshly sourced timber, a sycamore still growing in the grounds of Craiglockhart. It is a unique contribution to the history of the building and our modern links to the staff and patients of the hospital, and will hopefully be heard many times again at Craiglockhart and elsewhere. 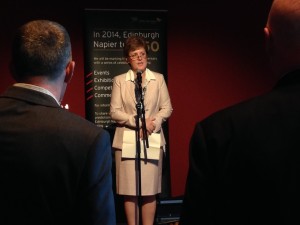 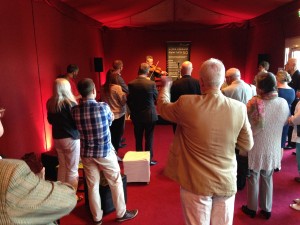 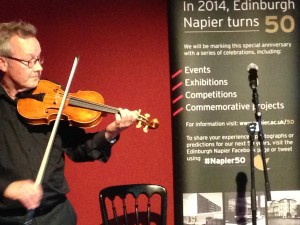