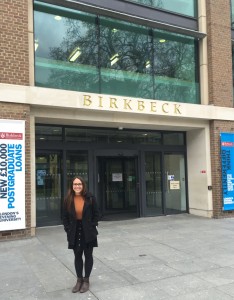 When fellow Napier PhD student Michael Palkowski brought to my attention two upcoming Masterclasses run by the prominent philosopher Slavoj Žižek at Birkbeck, University of London, there was no doubt that getting down there for the action was nothing short of a great idea. Žižek, apparently considered ‘the Elvis of Critical Theory’, is the most famous contemporary Lacanian theorist – making him a pretty big deal in my field of Lacanian psychoanalytic theory (a theory originally developed by French psychoanalyst Jacques Lacan, who built on the work of Freud and linguistics).

On the first day, we arrived at the university filled with excitement and anticipation. The talk was entitled ‘Surplus-Value, Surplus-Enjoyment, Surplus-Knowledge’ and held in a medium-sized lecture hall that quickly filled up with around 100 people. Having intensely read some of Žižek’s work and heavily cited him in my undergraduate dissertation, as well as having seen many of his thought-provoking Youtube videos, I was inevitably star-struck. It felt like going to a concert of a big shot celebrity. 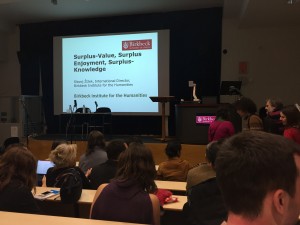 Žižek started off the first class by saying how tired he was of making improvised jokes, apologising for what was to be a ‘serious’ talk. What closely followed must have been at least three spontaneous and hilarious jokes. Moving on, the talk shifted from a(n) (intense) philosophical and epistemological orientation to a more political terrain; from materialism vs. idealism and the notion of absolute truth to the economic concept of surplus-value and the function of capitalism. It was difficult at times to follow his arguments, as references were made to a concept or name I did not know much about (but also due to him pursuing multiple points simultaneously). However the following day during his second talk this difficulty somewhat dissolved as the territory was more familiar to me. The focus was on perspectives on nature and the interaction between humans and nature from the standpoint of different fields, but particularly within the field of Lacanian psychoanalysis wherein the conception of nature is not uniform.

Overall, what was most astonishing with Žižek’s two classes was the diversity of his knowledge and the number of fields that were pulled into his arguments: mathematics, physics, philosophy, linguistics, cosmology, evolutionary biology, neuroscience, religion, ecology, bioethics and so on and so on. From this I realised the value of an interdisciplinary approach; looking outside your field to consider how things are and are not connected as a way of contextualising an area (and thus understanding it better), is not a bad idea.

So I have returned to Edinburgh with a thirst to find out more about certain notions, and a promise to commit myself to go to more public events when the opportunity presents itself. It is a powerful way to provoke your thoughts and instil an appetite for more knowledge. And if you happen to go with like-minded friends who ferociously debate with you over a pint of beer in the pub afterwards – even better.

If anyone is interested, the following is a link to Žižek talking about the refugee crisis on Channel 4 which was aired on the same day of the first Masterclass (the introducer started the second Masterclass by remarking some tweet responses to it): https://www.youtube.com/watch?v=5EYxqocgk9g

Podcast of the first masterclass: http://mariborchan.si/audio/slavoj-zizek/surplus-value-surplus-enjoyment-surplus-knowledge/

Podcast of the second masterclass: http://backdoorbroadcasting.net/2016/04/slavoj-zizek-masterclass-2-surplus-value-surplus-enjoyment-surplus-knowledge/