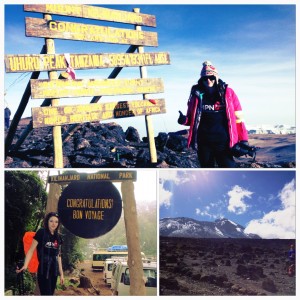 Since 2003, my father Professor John McClatchey had been living with polycythemia vera (PV), a rare blood disorder. Unfortunately last April he died of a sudden heart attack and I decided to raise money for MPN Voice, a charity that funds research into PV and other myeloproliferative disorders. Therefore, on the 25th of March 2016 I departed Scotland for Tanzania, with the ambition to climb Mount Kilimanjaro. I climbed with the company Action Challenge who guided our group of 12 on the 6 day Machame route.

The first day went seemingly well, but by day two (3827m AMSL) I was beginning to feel the effects of high altitude, which I can only describe as feeling like you are terribly hungover. The third day involved climbing high (4625m) and sleeping low (3960m), which did wonders for my altitude sickness. By day four our group were scrambling up the Barranco Wall and enjoying some spectacular views. It was this night however, we were informed we would have around three hours sleep before being awoken for our summit bid at around 10.30pm. By 11.30pm we had departed for the summit. I was wearing more clothes to keep warm than I thought I could possibly fit, although we were later told that our summit night had been unusually mild. After a nine hour slog uphill we arrived at Stella Point to watch the sunrise. I witnessed this through tears, as I was so relieved that we only had about 45 minutes until the summit. After the amazing porters had given us a hot drink, we headed towards the summit. Breathing at this point was extremely difficult and every step felt like a marathon. Eventually the summit was in sight. There were no clouds, just beautiful sunshine. Then our team made it. It was incredible. I don’t actually remember much from the summit apart from ‘I need to get down’. Once we got our pictures we started to descent, which was actually worse than the ascent due to exhaustion. Eventually we made it back to camp and departed for the hotel the next morning.

Overall, the whole experience was unbelievable! I would never have reached the summit without the wonderful porters who work on the mountain every day. They are superhuman. Big shout out also to Dr Dave, our team doctor, who helped us survive the 6 days. In total, I raised over £800 for MPN Voice through thoughtful donations, and these donations definitely helped me on summit night to keep going. A big thank-you again to everyone who donated. Back to PhD work now I suppose…