New Publication: The Role of Make-Believe in Foley 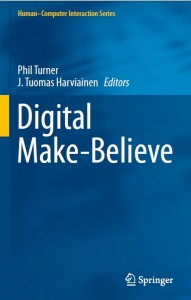 This month, my first book chapter has been published! It is called The Role of Make-Believe in Foley, and appears in Digital Make-Believe, by Phil Turner and J. Tuomas Harviainen. It is based on a study I carried during a research internship with my colleagues at the Edinburgh Napier University School of Computing. My collaborator, Phil Turner, recognised a gap in the literature on the acts of pretending and make-believe in adulthood, compared to the vast amount of information on these behaviours during childhood. We therefore identified a vocation in which pretending is vital, namely Foley artistry, and interviewed 10 artists for their views on the matter.

The role of a Foley artist is fascinating. Did you know that the only sounds recorded on TV and Film sets are the voices of the actors? Every other sound you hear, footsteps, a glass being placed on the table, the sound of clothing, horse’s reigns, and even sounds of an animal chase in nature documentaries, are all added post-production (watch this to see Foley in action and this). The sound effects team take care of unrealistic or novel sounds (such as a dragon’s roar or a space ship) but a Foley artist adds every other sound you can ‘see’ in a scene. They do this by using props that sound the same as we, the audience, would expect them to sound. The most well-known example of this would be using two half coconuts to mimic the sound of horse shoes. Another example would be to rustle a plastic bag to make the noise of fire. The possibilities are truly endless, and the artists we interviewed spoke of the tricks of the trade, their creative process, the importance of acting in their role, and how physically challenging the job can be.

We found clear evidence that pretending is a behaviour that exists in adulthood, and is therefore not restricted to childhood. Further details can be found in the chapter.

This was my first experience of qualitative data collection, and I had previously been adverse to these methods due to my strong preference for quantitative techniques. However, the interview process was interesting, fun, and it was lovely to engage with the participants, and to learn about their intriguing careers. I probably got off lightly, as our analysis was exploratory, but I did enjoy the experience of using methods outwith my comfort zone.

I’d be happy to discuss this research with anyone who is interested.