With over 7,000 views, our topic for May’s #trusteehour clearly struck a chord – what research should you do before saying yes to a charity trustee role? Thanks to @RummleGumption for the theme idea.
Here are the top tips shared:
1. Basic due diligence online means checking out a charity’s website; googling for news stories involving the charity; look at their accounts online; look at their information on the charity regulator’s website. Thanks to @ian_mcl for his list of these.
2. Think people and culture, as @friend_natasha points out:

3. Look carefully to find out about the exact legal structure of the charity. There are two main kinds. One is unincorporated (for example a trust or an unincorporated association). The other is incorporated (for example a company limited by guarantee, or a CIO in England and Wales, or SCIO in Scotland). This latter type offers a bit more liability protection for charity trustees and has other benefits, such as contracts can be in the name of the charity instead of individual trustees.
4. Find out if the charity has indemnity insurance in place. Some do, some don’t. For unincorporated charities, this was seen as being particularly important:

5. Consider practical things, like location, which day of the week are board meetings held, and at what time. Those practical points could rule a potential trustee role in or out – also check out skype/video conference options, which might be specifically enabled in a charity’s governing document:

6. Do you get any help from your employer? There was mixed experience with this one, with some employers actively offering paid leave to support employees who take on voluntary roes:

7. If things get to the interview stage, ask for a copy of the governing document if it’s not otherwise available online – worth a read in advance:

8. Understand what the time commitment is going to be. Will there be committee meetings as well as board meetings? Will you be expected to ‘represent’ the charity and be an ambassador at events, as @sallyld points out:

9. To help make sure you are not ‘out of pocket’ in taking on a trustee role, what expenses does the charity offer to refund? It’s normal to find travel expenses can be refunded, for traveling to and from a board meeting. But there might be more help available. @ian_mcl shared an interesting idea for charity boards, which may help encourage younger candidates to consider a trustee role:

10. If you’re in Scotland, check out @GoodHQ for reviews and comments on charities in Scotland – this can help you research a role: 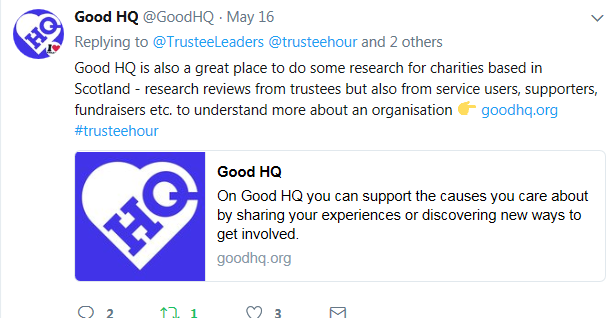 Two blogs were shared.  The first was a guest blog I wrote for OSCR’s website with top ten tips on due diligence.  The second blog was from @CT_charities, which made a good point about checking if induction support is available for new trustees.
And finally, news of our next #trusteehour on Tuesday 12th June 8-9pm – the topic is ‘When is it time for a trustee to step down?’ with thanks to @MairWCVA for the theme idea.

This is a guest blog by Julie Hutchison, Charities Specialist, Standard Life Wealth.

On 14th February 2018, RSM hosted an afternoon seminar in their Edinburgh offices, for the first cohort of Get on Board candidates from Edinburgh Napier University and the University of Edinburgh.  This blog summarises the topics covered, as a further reference point for those who attended on the day and a resource to support those who could not join the session.

Victoria Simpson of Anderson Strathern began the seminar by going through the various charity trustee duties which apply in Scotland.  This brings in the Charities and Trustee Investment (Scotland) Act 2005, and a good summary of what you need to know is contained in OSCR’s Guidance here.

The main duties to keep in mind as a charity trustee are:

Victoria spoke about ‘conflict of interest’ situations, and the need for a trustee to declare an interest, and for this to be recorded in the Minutes and a Register of Interests.  The key thing for a trustee is to put the interests of the charity first, and declare their personal interest in the matter concerned.  It may be necessary for a trustee to not participate in part of a meeting where something is being discussed, should that be necessary in order to manage the conflicting interests.

Moving onto the theme of charity accounts, Janet Hamblin of RSM ran through some of the financial points trustees need to be aware of. A Statement of Financial Activity was reviewed, looking at income and expenditure, and drawing out the difference between restricted funds (which must only be spent on certain things) and unrestricted funds (which are available to support general charity expenditure).  Janet emphasised the need for good internal financial controls, and the need to monitor cashflow.

From a charity investment perspective, I then gave an overview of why a charity might take the step of investing, moving from having cash only, to having a mixture of cash and investments.  This tends to happen when a charity has built-up a large sum of cash and is looking for the opportunity to gain better returns over a long term timescale, accepting the ups and downs of the stockmarket in doing so.  Ethical screening was introduced as a topic, to show how some charities avoid investing in certain sectors which conflict with their charitable purposes.  I mentioned #trusteehour as a means for the Get on Board participants to engage in an online community of trustees on twitter, to further develop their awareness and knowledge of charity sector issues.

The final speaker was Elaine Crichton of Inspiring Scotland. Elaine looked at board dynamics and the kinds of behaviours encouraged around the board table.  Key to this was the importance of asking questions as a trustee – and there’s no such thing as a daft question!  Trustees can be positive ambassadors for their charity, and Elaine spoke positively about what younger trustees can bring to the role.  The group dynamic was an important point, as trustees take decisions together on a collective basis.  Being an active listener and respecting other viewpoints was also discussed.  Finally, enthusiasm is valued!

For more information about the Get on Board programme and the competency pathway associated with it, see this blog by Dr Miles Weaver of Edinburgh Napier University.