”…it helps to be a creative-minded person – you’re building things that have never been built before….. ” 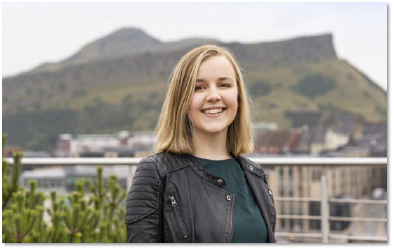 How did you find your way into tech?

I’m a Delivery Team Lead with a company called Forrit. Previously I was a graduate apprentice web developer. What you do as a developer depends greatly on the company that you work for and the type of development that you specialise in. In my role at Forrit at the moment, I build websites. I think if I had known, when I was younger, what being a developer was, what it involved on a day-to-day basis, I would have known a lot sooner that that’s what I wanted to do. It wasn’t until I was about 15 years’ old, and I did a week of work experience at a web development company, I got to meet developers and talk to them about what they were working on. That’s when I realised, this is very cool. This is something I’m interested in.

Before that I think the only thing, I knew about being a developer was something that my friend at school had told me. He said that you needed to be really, really good at maths. I was not great. So that didn’t fill me with confidence. Since then, I’ve learned that some of the problem-solving skills that you learn in maths can be helpful as a developer, but it’s certainly not a requirement and in fact, a lot of the developers I know say themselves that they are actually not great of maths. When I was in school, my favourite subjects included French, art and music; and you might think that they have nothing to do with tech. But I think there are lots of transferable skills. You’d be surprised how similar learning human language is to learning a computer programming language. And I think it helps to be creative minded when you’re building things that sometimes have never been built before it.

What does your role involve?

One of the common misconceptions about developers is that we spend all our time in front of computers, and we don’t speak to anybody ever. I know what we do is write code but actually, I would say on a daily basis it’s more like 50/50: you spend half of your time writing code and half of your time working with people, for example, figuring out what people want a piece of software or web site or an application to do. And finding how you’re going to work together to achieve it so there’s more to it than just writing code.

There’s a lot of working with people as well. Obviously now, because of the pandemic everyone is working from home. So, at the moment I get to work at home every day, but in the office, it’s just generally a pretty laid-back fun place to be. And I get to work with some really fun forward-thinking teams of people.

Some of the highlights of my last 4 years have included a trip I got to go on last January to Microsoft headquarters in Seattle, America, which was incredible. A dream come true. Last year, I also got the opportunity to go down to Westminster to the houses of parliament to talk to about the importance of apprenticeships like mine.

What advice would you offer?

There is more than one path to your dream job. You have to focus on how you learn best and pick the path that works best for you. I’ve worked with so many people that have come from a variety of backgrounds, there’s no one right path into development. If you’re a creative minded person, if you enjoy problem solving and the sound of being part of the construction of technology that literally changes the world excites you then I strongly recommend a career in tech.

What did you enjoy about your course?

When I finished high school, I did go to university, but I realised after a year that it wasn’t for me. I dropped out and got the opportunity to become a graduate apprentice web developer at Forrit. Everyone has different ways that they learn best, but for me, this was the perfect opportunity. It meant that I could learn 4 days a week on the job doing things practically, surrounded by experienced professionals that could help me in my learning, but it also meant that one day a week I could attend classes at university and apply that learning into the work I was doing every day.