The year 1929 witnessed a worldwide economic devastation which coincided with the tenth anniversary of the Treaty of Versailles. In the year before, the tenth anniversary of the Armistice, a number of non-fiction books were published assessing the treaty and its impact, questioning the outcome of the Great War. Hermann Stegemann openly condemns the treaty in The Mirage of Versailles: “In the wildness of its design and the glaringness of its colours it shows that the World War has not resolved the world crisis, but has ended in blind confusion” (1919, p. 18).

Questions surrounding not only the treaty itself but the war-guilt clause and accusations of Germany’s sole responsibility for the war also came to a head. The Times reported the discontent felt with the treaty by the states accused. The below extract from The Times is one example of the reaction from both Europe and the US. Whether or not Britons had as strong a reaction towards Germany’s discontentment, there was an undeniable growing interest in the German experience of the war demonstrated by the increasing demand for translated German war books. During that same year, Erich Maria Remarque’s iconic Im Westen Nichts Neues (All Quiet on the Western Front) was released and his portrayal of German soldiers as a ‘miserable, downtrodden pawn’ (Eksteins, 1980, p. 375) was met with a mixture of both sympathy and condemnation by British readers and reviewers.  Assessments veered between seeing it as disreputable and exceptional; similarly, in Germany it was criticised from both political wings,: from the left, for not condemning war enough, and from the right, for criticising the German soldier. 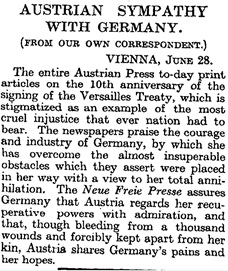 During the anniversary of the treaty and with the increasing popularity of Remarque’s German bestseller, the demand for German translations continued to grow. In the database of works of the War Books Boom that has been compiled for this project (which will be made publicly available via a DOI when a related academic article is published), 1930 sees over 50% of the translated works recorded coming from German originals; there is a steady increase in the number of texts translated from German, peaking, as with the boom itself, in 1930.

Alongside Remarque’s work, Walter Bloem’s World War I memoir Vormarsch (The Advance from Mons 1914: The Experiences of a German Infantry Officer), which was translated into English in 1930, was successful among British readers. Lieut.-Colonel F. E. Whitton claims it as the ‘most accurate war-book that has come out of Germany’ (Whitton, 1930). Similarly, Edwin Erich Dwinger’s The Army Behind Barbed Wire: A Siberian Diary (1930) was received with success, later praised for its ‘documentary style which embellished its truth value’ (Fritzche, 2012, p.111). It tells of Dwinger’s individual suffering and accusations towards the dehumanising impact of war. He writes about a dead body, stating that this man ‘is no longer a sapper from Hardberg called Meier or Muller, this winter, he is only Typhus Casualty Number 14324’ (Dwinger, 1930, p.121). The tales of the war’s devastation and trauma felt by German soldiers within these translations revealed to British readers the similarities between individual German experiences and their own.

(with edits by Andrew Frayn)

This blog is part of a research project on The War Books Boom, 1928-30 led by Andrew Frayn.  This was partly funded by Edinburgh Napier University, and funding for a cognate project came from the Carnegie Trust for the Universities of Scotland. Beth Campbell’s work on this as an intern was funded by the Centre for Literature and Writing at ENU.