Ian Hay and the ‘New Generation’ in Their Name Liveth On

The final chapter of Ian Hay’s Their Name Liveth: The Book of the Scottish National War Memorial (London: John Lane, The Bodley Head, 1931) provides a striking insight to interwar Scottish war memory and the War Books Boom. “Ian Hay” was the nom de plume of John Hay Beith, who would become Major-General in the First World War; born in Manchester to parents of Scottish descent and schooled at Fettes College, Edinburgh, his paternal grandfather Alexander Beith was one of the founders of the Free Church of Scotland in 1843.  While Hay does not overtly attack disenchanted war literature, which many perceived as portraying soldiers negatively, he subtly asks his readers to recognise that the blame should lie with the nature of the war itself: ‘the institution and the instrument are equally condemned’ (p. 154).

Hay, an establishment figure, imagines at length what a member of the New Generation might think about the war, bemoaning that they ‘quote to you various passages from one of the new style War novels’ (Hay, 1931, p. 151). For Hay, in these novels, the soldier is ‘variously depicted as a machine, a slave, or a dupe; frequently as a brute or a coward’ (p. 154). He sees these ‘new style War novels’ as eroding the honour and glory of the collective memory of the war; the rosy view of conditions which formed Hay’s view of his service in the Argyll and Sutherland Highlanders, and which he put forth in The First Hundred Thousand (1915) and Carrying On (1916),  now seemed distant. 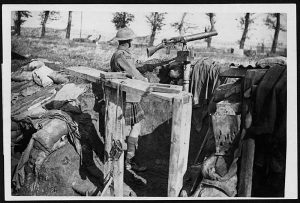 John Warwick Brooke, ‘Highland machine-gunner ready with his gun for any emergency’. Official war photograph thanks to National Library of Scotland. https://digital.nls.uk/first-world-war-official-photographs/archive/74547316

Hay is also to some degree sensitive and pragmatic in his understanding of the New Generation’s lack of affection for the heroic warrior figure and dislike for the horrors of modern war. He writes that ‘we can hardly blame the New Generation for not caring. In any case, it behoves us to be very, very tender with the New Generation, for theirs has been a barren inheritance’ (p. 155). Hay demonstrates a consciousness of the inadequacies of the post-war world, the ‘fit country for heroes to live in’ seeming less and less likely to materialise, It also highlights the perception of a gap in understanding between the war and post-war generations (although this was far from the only schism). This is a moment at which the glorious and honourable representation of the World War, still common in the 1920s, no longer seems tenable: society’s ‘blind determination to make a hero out of everybody who had contributed’ has turned back on itself to reflect the country’s growing sense of disillusionment and disenchantment (p. 153).

Hay’s overall conclusion goes against the many contemporary newspaper articles that suggest that the War Books Boom occurred because people were finally ready to discuss accurate experiences of the war. He insists that:

we are, at present, too close to that world tragedy, the Great War, to be able to judge it in any true perspective. […] Plainly, then, our reactions and emotions upon the subject of recent history are at present too fluid to have any lasting value. We must leave Time to crystallise them. (Hay, 1931, pp. 153-4)

Hay argues that the books produced during the War Books Boom still do not have the appropriate temporal and emotional distance to be able to represent the Great War accurately. He dismisses the narratives produced during the War Books Boom, asking his readers only to remember those who lost their lives, stating ‘that is all our dead ask of us’ (p. 156).

(with edits by Andrew Frayn)