Earlier this summer I participated in my first international conference, which took place in Lisbon, Portugal. As part of the conference, I presented my PhD project at the doctoral consortium. Here are some of my thoughts regarding the event as well as my overall impression of the conference.

I was quite surprised when I heard that the conference will take place in the Marriot hotel. I have never been to Marriot let alone been invited to one :D. Everything from spacy rooms, through excellently planned layout to delicious food and snacks were provided. Both organisers and hotel staff went the extra mile to make the event successful.

The only thing that bothered me was that three workshop rooms were bordered by the main break room, which at times proved to be a disruption for both the presenters and the audience.

Coming to this conference I did not know what to expect. The only thing I was sure about was that I will participate in a doctoral consortium on the 2nd day. It was upon entering the venue that I learned that it was actually multiple conferences taking place at the same time. While all conferences covered slightly different subjects, the common theme was technology and its impact on today’s world.

Each day began with an opening session and then was preceded by a series of thematic presentations. It would be hard to pick one most interesting session for me to talk about. I very much enjoyed the dynamic of these sessions as after presentations we were able to get into the discussions with the researchers. The fact that the conference gathered people from both industry and academia added to the experience by providing extra perspective from both sides. It was entertaining and insightful to listen to the opinions from various backgrounds and contribute to the discussion.

The event was a great chance to meet new people and discuss various problems in machine learning and other related fields.  First time in my life  I felt like an expert in my field (I am not one lol) and could discuss various concepts and ideas with minds alike on such a big scale. At one time after the presentation on the use of reinforcement learning in tutoring systems, our post-session discussion almost turned into a second session with people joining the discussion at the lunch table later on.

The second day of the conference began with the doctoral consortium. Fortunately, I was second to present so I was not that stressed out. Nonetheless, it was probably the first time when I presented in front of a crowd this big (30 people wow) and the panellists. Despite all of that I was much calmer than I anticipated.  I was able to convey my idea the way I intended. Further conversations with the panellists and the audience highlighted the use of semantics in my research, which to be honest I have not considered thoroughly before.

Although I was not able to win the best paper award, I am very pleased with my performance and it made me feel more motivated and certain about my research. I feel more confident going forward and delivering more concrete results once I start working with the data.

One thing I found odd compared to the SICSA event (you can read about it in my previous post) was that there were no post-doctoral speakers that could talk about their journey as a PhD students. It would have made the entire event more entertaining and also could serve as a connector between us.

Day 2 of the conference was succeeded by the social event. Again in this case I did not know what to expect and didn’t want to spoil the surprise by reading the brochure haha! The buses took us to Centro Cultural de Belém, which is the largest building with cultural facilities in Portugal. I was expecting some regional food and maybe some remarks from the organisers but I couldn’t be any more wrong.

Apart from amazing food, they hired a traditional Portuguese dancing group. We were able to learn something about the culture and history of this amazing country, by exploring various folk costumes from all over the country. Furthermore, I witnessed some of my best dancing performances, ba! I also participated in two! The advice from my supervisors to attend the social event really paid off. It was there where I met most people and formed some deeper connections with some. 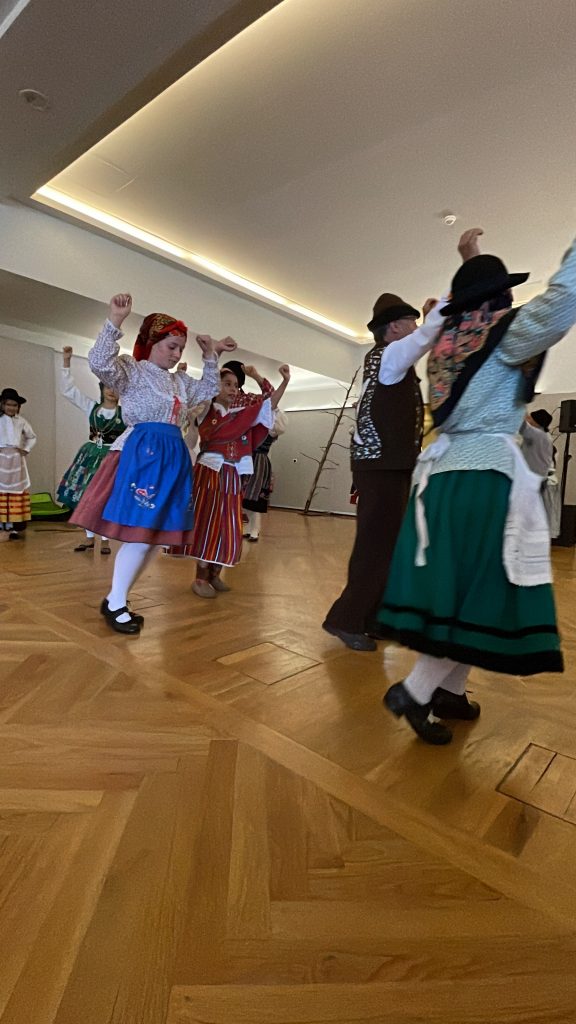 My advice for anyone attending such events, whether the designated social event is included or not, is to talk to as many people as possible. You really cannot go wrong with approaching people standing by and starting the conversation. I found that many people are quite hesitant to begin the dialogue themselves, while they still have very valuable things to say. I thought to myself that it would be such a waste of being granted the opportunity to be in the same room with such a diverse crowd and not talk to them. It was an amazing experience to be able to talk with experienced professors or industry experts as equals. I learned a lot about current developments in the machine learning industry and gained an extra perspective on my research.

Meet new people, go explore the city together and have fun!

Special shout-out to two Polish guys who made the entire event much more fun! Thank you Kacper and Antonio!

"It’s because we possess a deep understanding of the world that we can quickly understand what other people are talking about" from @ylecun and Jacob Browning on the limits of language models, see: https://www.noemamag.com/ai-and-the-limits-of-language/