Looking for Marginal Gains – where none exist – probably! 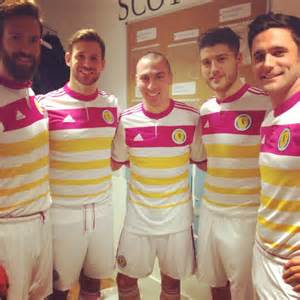 In a week when the Winter Olympics finished, all the English club teams struggled in European competition, the England cricket team to the field once more minus Kevin Pietersen and a football manager assaulted a player during a game, it seems perverse that the biggest story is about the colour of Scotland’s new away strip!

It is a question I’ve been asked on more than one occasion; can the colour of the team’s kit
influence the way a team performs? Can it have an impact on whether they win or lose?
My view is that here we are talking about a factor which is at the margin of the margins. There has been a little bit of mainstream psychology research looking at the impact of environmental colour on mood, emotion and behaviour. However most of this research is of a poor quality due to lack of strong theoretical foundation and poor methodology. Much of the existing work has been concerned with environmental colour in the
workplace, testing the idea that certain colours can determine different moods and different emotions, leading to calmness, clarity of thought and creativity. Interpreting the results is a challenge as the research is correlational, making cause and effect difficult to determine.

The colour of sports kit has also received a small amount of research attention. In a study conducted by psychologists from the University of Münster in Germany. The team found in the sport of Tae Kwon Do, referees tend to assign more points to competitors
dressed in red kit when they fought opponents dressed in blue. In this study the researchers manipulated the video images so the same athletes were presented to expert referees in both blue and red. Competitors in red kit appeared to be advantaged by referees in their split-second decisions.
The new Scotland away strip has been described by some commentators as ‘rhubarb and custard’ in colour, others describe it as resembling a trifle. There are horizontal stripes of red/pink and yellow on a white background. It probably does the first job required by a football shirt. There is sufficient colour and contrast for it to be sufficiently distinctive to enable team mates to rapidly spot each other on the field of play; this was the problem with Manchester United’s grey away strip which was changed during a game because players argued that they couldn’t find each other on the textured backgrounds of a full
stadium. The second purpose of a shirt is to evoke positive emotion, in both players and fans – a shirt can be a powerful symbol. A new shirt always has a challenge in this respect. It has no history, it lacks association with powerful memories. If this is the shirt that Scotland win in Germany or Poland wearing, during the Euro 2016 campaign, then all will change. The players and fans may begin view it in a different way. The iconic blue shirt will always be associated in the minds of fans with Wembley 1967 and the heady days of Sounness, Dalglish and co in the 1970’s and 80’s – it evokes a nationalistic passion in a way that pink is unlikley to match. 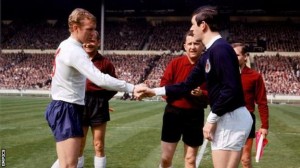 The new shirt will need to be associated with some great victories to win over the fans.

I suspect that the new away strip will have a relatively short lifespan in exactly
the same way as Scottish Rugby’s experiment with orange shirts was hurriedly dropped.
The research, as it stands, on colour and sport performance is sparse and difficult to interpret. In terms of face validity it appears that red has an advantage, but the most successful rugby team in the world plays in black, the most successful nation at Soccer’s World cup plays in yellow, until very recently the most dominant cricket teams all played in white! If there is a performance enhancement margin, it is tiny  and perhaps
we ought to look in other places first.
The ‘Naked Sport Psychologist’ is a guest on BBC Scotland’s Fred Macauley show on Tuesday 4th April – discussing the new Scotland Away Kit.