Philosophical debates around the nature and purpose of sport can be traced back to the works of Plato (Four Cardinal Virtues; courage, justice, temperance and prudence) and Aristotle (who developed the cardinal virtues further into the notion of Phronesis (practical wisdom) and Kalos (aesthetic beauty). These ideas were given prominence in the Victorian educationalist movement, responsible for formalising and codifying many of the forms of sport we recognise today. This is typified by the view propounded by Matthew Arnold – Headmaster of Rugby School , that sport had a unique character building role in the intellectual and moral development of (specifically) young men. This view became known as the ‘Muscular Christian’ function of sport. If we scroll forward to the twenty first century: The socio-cultural position of sport has changed. The global media-commodification of top-level sport has given it a unique cultural, social and political (and possibly religious) platform. Modern sport appears to be more concerned with money and hype, greed, violence, vindictiveness and schadenfreude are thrown in for good measure. 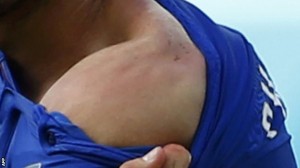 FIFA, the world govening body for Football has been presented with a golden opportunity to adopt the highest of high moral positions about how the game should be played. I have no doubt that it will not.

Luis Suarez is a sublimely skilled footballer. His ruthless finishing transforms teams from the moderate to the genuinely threatening. But he has a fatal flaw – it appears, that when he is frustrated, by good, strong but fair opponents, or placed in high pressure situations, he bites opponents.
I listened to a radio phone-in about Suarez this morning. The callers fell into two groups – those who felt he should receive a long ban and Liverpool fans. The Liverpool fans felt that his unheralded charity work should be used in mitagation for his on-field behaviour. They are deluded. Luis Suarez may be the nicest, most warm-hearted individual off the pitch. But on it, he is a danger to himself and others. He should not play again, EVER.
That a player is a different character on the pitch from off it is not a unique observation. The literature describes ‘game reasoning’ where players’ moral reasoning changes dramatically once they cross the whitewash. Players who display very high levels of moral reasoning off the pitch often regress to ‘right is what I can get away with’ or ‘he did it to me, so I did it back’ type of morality – much lower level reasoning. There is a specific problem of determining intention in relation to aggressive behaviour. Match officials have to determine the fine line between legitimate force to win a challenge, which may be mistimed or clumsy and the intention to inflict harm. The line can be difficult to determine with foot, shoulder or elbow – but teeth…!

There must be due process, evidence reviewed and Suarez given an opportunity to defend himself. On the evidence to date Suarez ‘s behaviour appears to be a pathology akin to a personality disorder. There are many people across the world in-patients in secure mental health units because of their unpredictably violent behaviour. They are there to guarantee the safety of themselves and the random people they may meet. This appears to be Suarez’s third offence. Allowing him a further opportunity to bite a fellow professional (read these words again) is wilfully irresponsible.
I have some sympathy for the Liverpool fans on the radio. Suarez was largely responsible for their best season in years. He is the club’s biggest assest on and off the pitch. They rightly argued that if Liverpool view his behaviour as misconduct and sell him, there will be a queue of Europe’s best clubs looking to buy him. This is why any ban has to be world-wide and permanent.

There are two other points I need to make;

I have an 7 year old son. This is the first world cup he has followed. He has been thrilled with the brilliance of Messi, Robben and Neymar. Yesterday he and all his friends were talking about Suarez.  This is bad for football. Players often complain that that they should not be role models. This is poor understanding. You don’t choose to become a role model, you are chosen without your consent. But once you are one you have a responsibility. What you do matters.

Players are looking for a competitive advantage. Who wants to mark Suarez? Chiellini is a world class defender and he was doing an excellent job of marking Suarez out of the game. The threat of being bitten was probably not on his mind – it will now be on the mind of every future opponent. This gives Suarez an illegitimate advantage.

FIFA can ban Suarez, internationally and domestically for an indefinite period. Unfortunately FIFA’s own moral garden is far from in-order. I strongly suspect that money will talk louder than the greater moral good. Suarez will be back playing probably not in either England or Italy within six months. And shortly after there will be another incident.