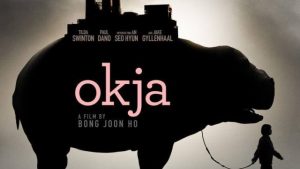 The latest film from South Korean Director Bong Joon Ho made its Edinburgh International Festival debut at the weekend. Joon Ho first came to the attention of Western audiences with his much commented upon K-horror The Host (2006) and his more recent Snowpiercer (2013). Now, having moved into the warm embrace of Netflix funding, Bong Joon Ho has brought us what might be termed a fantasy about food scarcity, animal rights, and the unintended consequences of genetic modification.

Okja is at its core the compelling story of a girl, Mija (played with tremendous energy by Seo-Hyun Ahn) and her beloved super-pig Okja (brought to us by the wonders of CGI). Okja herself is part of a ten-year experiment by a rebranded food giant Mirando (the linguistic similarities to the controversial Monsanto is clearly intentional) in an effort to combat growing food scarcity while feeding a global appetite for mystery meat jerky that is still somehow ethically produced.

Lovingly raised by hand on a picturesque mountainside, Okja and Mija spend their days frolicking in woods and streams. When the time comes for Okja to be sent on for the ‘Best Super-Pig’ competition, Mija is distraught and sets out to rescue her best friend. Along the way, she ends up becoming embroiled in the actions of the Animal Liberation Front, who seek to not only liberate Okja but bring down Mirando.

So, what does this film have to do with Frankenstein? Plenty. What’s interesting about looking at Okja through a Frankenstein lens is that we try to work out who exactly is taking on the role of creator and creature. There are several figures who occupy these roles. Firstly, the Victor Frankenstein figures: Frank Dawson (Giancarlo Esposito), Johnny Wilcox (Jake Gyllenhaal) and Lucy and Nancy Mirando (Tilda Swinton) all take on aspects of this role.

Johnny Wilcox is played with anarchic verve by Gyllenhaal who seems to be channelling Gene Wilder’s Frederick Frankenstein, along with a few flourishes from Sasha Baron Cohen. An attention-seeking extrovert who has sold his soul to the media and corporate America, Dr. Johnny acts as the friendly face of the Super-Pig Competition. Later, when he is forced to experiment on Okja herself, he is revealed as both troubled and unhinged. His guilt over how he has become hopelessly enmeshed in the Mirando machine is not dissimilar to the anguish experienced by Victor Frankenstein. Secondly, the Mirando sisters themselves are two sides of an equally troubling creator figure, with Lucy representing the face of how some agro-businesses have co-opted the language of the slow food movement, but without any fundamental commitment to an ethical means of production. Lucy is a made-over creation, a figurehead spouting media-friendly sound-bites while she is propped up by her team of handlers. Nancy (also played by the peerless Swinton) bears a frightening similarity to Theresa May. A hard-nosed capitalist, Nancy is interested only in money and total authority. She is the whip hand to her sister’s soft-focus approach in running the company. In many ways, the Mirando sisters symbolise the separation of emotion and ambition, just as Victor won’t allow his emotions to check his desire to achieve his goal of creating a living being. Finally, perhaps the most sinister figure here is Frank Dawson, a kind of puppet-master/yes-man behind the success of Mirando. He is the one who manages Lucy and then seamlessly steps in to assist Nancy as she takes over towards the end. Dawson (played with imperturbable cool by Esposito) is the most sinister of all: fixated on success at any price, he represents the ultimate in un-checked ambition.

Finally, the creature is of course Okja herself. Resembling a cross between a hippo and a pig by way of Studio Ghibli’s animation style, Okja is certain to convince many viewers to at last go vegan. Adorably rendered in her movements and gestures, Okja is part of a long line of cute animal avatars that play to viewers’ emotions. While she does not possess the human speech of Bambi, Okja is nonetheless in the firm category of pet as opposed to food. When the film visits Mirando’s brutal slaughterhouse/lab and we witness a huge paddock of super pigs, we can’t help but be reminded of the infamous exchange in Pulp Fiction where Jules (Samuel L. Jackson) and Vincent (John Travolta) discuss the ethics of bacon:

Overall, Okja presents an enjoyable fantasy filled with moments of silliness and terror. Not unlike the work of that commendable Frankenstein fan Guillermo del Toro, this story is filled with troubling loose ends about the ethics of what constitutes food and how it is produced.