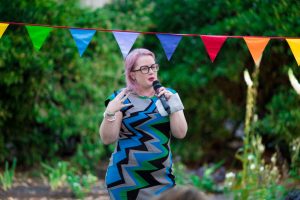 On Friday 22 June I appeared at the inaugural British Academy Summer Showcase Late.

Performing as part of the Humanities and Humour strand, it was a pleasure to poke fun at Frankenstein while sharing some of my research for the second time this year, courtesy of an invitation from comedian, impresario, and recovering academic Steve Cross. Steve is the creator of Bright Club, Science Showoff and The Over-Analysers Book Club, at which I performed back in January (listen to that set again here). The Summer Showcase was a fascinating evening, and I particularly enjoyed the exhibits related to early modern sleep, and the edible perfume from AVMCuriosities