In 1920, The Cabinet of Dr Caligari was released, and the City of Edinburgh decided to gift The Leith Theatre to the people of Leith as it was incorporated into the city. Abandoned since the early 80s, the old theatre has been home to Hidden Door Arts festival since 2017 and is now looking forward to a new life as a music venue. Leith Theatre was therefore a fitting and atmospheric venue to show The Cabinet of Dr Caligari as part of Hidden Door’s 2018 programme. The silent film is often cited as the first ever feature-length horror film and the decaying theatre and electronic soundtrack suited it well, making it haunting even to a contemporary audience.

The new score, provided by The Reverse Engineer, Midi Paul, Matthew Collings, WOLF, Heir of the Cursed and HQFU, gave the film a new lease of life. It was easy to forget that the film was nearly 100 years old with the hypnotic synthesisers and distorted vocals accompanying it. The Cabinet of Dr Caligari has a history of inspiring musicians.  In addition to inspiring contemporary musicians like, Minima, the film is also famously associated with the gothic band Bauhaus, who used Cesare the somnambulist’s face on a t-Shirt for their song Bela Lugosi’s Dead. At the Hidden Door performance, watching the musicians alongside the film, there was something of the mad scientist in them as they stared at the film and met their cues with surgeon-like precision. If the film alone did not leave you shaking in your seat, then the vibration from the speakers certainly did. 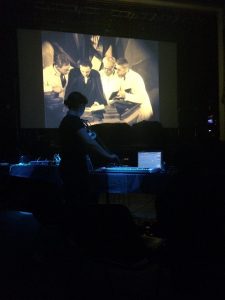 The film itself holds up well and the influence it has had on more recent horror movies is apparent, as is the influence of the Gothic literature that preceded it. Dr Caligari is the first mad doctor to grace the screens of horror. We first meet him as he creeps, hunched over, across the screen reminiscent of Robert Louis Stevenson’s Mr Hyde and later of Victor Frankenstein in his obsessive pursuit of power. Dr Caligari and Victor Frankenstein are both creators who abuse their positions of power in their compulsive need to play God.

Victor is a scientist who seeks to create life; whereas Dr Caligari is a doctor of psychiatry seeking to control those around him. This switching of fields updates the gothic tales of the 19th Century, with their fears of being buried alive, for 20th Century audiences and their anxieties around the emerging field of psychoanalysis. The legacy of the mad doctor in both biology and psychology is prevalent in the horror genre, as is the fear of corruption within these professions for contemporary audiences. These themes are seen in subsequent adaptations of Frankenstein from the 1930s onwards and more recent films like Shutter Island– which owes a lot to The Cabinet of Dr Caligari. The Soska Sisters’ twisted 2012 film, American Mary, embodies modern ethical questions surrounding plastic surgery and clearly draws on Frankenstein and The Cabinet of Dr Caligari to do so. The popularity of these modern retellings illustrates the lasting resonance of these earlier texts.

Cesare (Conrad Veidt), Dr Caligari’s murderous somnambulist, is a clear visual influence on later depictions of Frankenstein’s monster. He is slow moving, his arms often outstretched as he walks, with large dark circles under his eerily white eyes- not unlike Boris Karloff in the 1930/1935 adaptations of Frankenstein. Cesare also bears an uncanny resemblance to Tim Burton’s outcast creation Edward Scissor-Hands, with his sad, vacant stare. The influence of The Cabinet of Dr Caligari on Tim Burton’s work does not end here. The jagged set, that is emblematic of German Expressionist cinema, is a clear influence on Tim Burton’s animations. The easily traced influence of Caligari on more recent horror films, combined with the new score, made the film extremely accessible for the contemporary audience at Hidden Door.

The dilapidated old theatre that is home to Hidden Door this year, lends itself perfectly to the showing of vintage horror films. The Cabinet of Dr Caligari was an excellent choice given its lasting influence on the horror genre today and its connection to Gothic works from the past. The new electronic score gave the old film a contemporary feel. Many of the anxieties that this film expresses, around the medical profession and its power, are still relevant today and the new score brought this home. The quick pace of the score struck panic into the audience, while the underlying whispering was paranoia inducing. As Cesare was under the control of Caligari the audience too were at the mercy of the musicians.

It was inspiring to see this silent movie undergo this celebration, as Metropolis did in last year’s Hidden Door programme. Works like Frankenstein and The Cabinet of Dr Caligari are timeless in their themes which is why they still influence various works of art today. This was a hugely fun and original event. 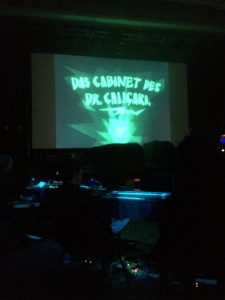