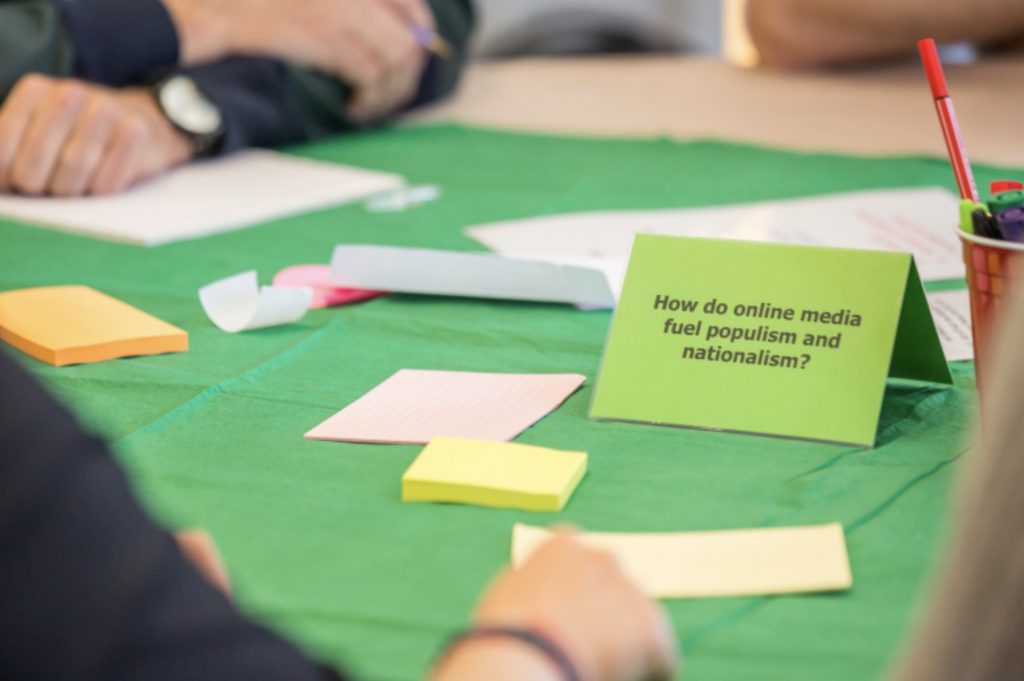 “There’s no expert – everyone’s experience and opinions matter. Imagine a lively gathering, full of interesting conversations, and plenty of food for thought!”

In the following case study, Dr Kranert has presented the details of the event – including critical insights, and recommendations for the improvement and enhancement of this type of event.

The World Café took place on the afternoon of the first day of an academic conference, ‘New discourses on populism and nationalism’, hosted by the Languages group at the university on 21 and 22 June 2018. Through posters in public locations, online media engagement and individual invitations sent to NGOs and groups interested in politics, an interested public was invited to an afternoon of exchanging ideas with international researchers working on populism and nationalism.

The World Café is a method for facilitating collaborative and active dialogue even in large groups. Set questions are discussed in small groups which encourages everyone’s contribution. Towards the end of the session, experiences and insights a shared with the whole group.

The openness of the conversation allows academics and non-academics to share insights into a problem – in this case the intertwining between nationalist and populist discourses. Four questions were asked:

(1)   How do online media fuel populism and nationalism?

(3)   How is language used to create nationalist and populist politics?

The visual facilitator Graham Ogilvie created cartoons while the World Café took place. This not only serves the purpose of documenting the event on the blog, but also gave participants the opportunity to see ideas come to life in a visual form and encouraged them to feel that their contributions have equal value.

The World Café methodology was combined with a multimedia campaign: Academics and non-academics were asked to produce short text introducing their thoughts on the topic in a clear and accessible manner. The text-based contributions were published on the event blog and distributed via Twitter.

The blog allowed for engagement with a broader public beyond the participants, facilitating their participation in academics and practitioner’s knowledge, as well as the methodology of knowledge exchange. It also formed the basis of the documentation of process and results, together with the cartoons and photographs of the event.

Why did you choose these methods of engagement?

The discussion at the world café was designed to allow both academics and non-academics to listen to each other’s experiences and build a network for future knowledge exchange.

World-cafes as mechanisms of public engagement have been underused in academic conferences. The standard public engagement element is a panel discussion, leading to a very limited and often one-way engagement with academic work. This world café aimed to have an open, inclusive approach, acknowledging that knowledge and expertise does not lie solely in the academy.

The world café was a great success in both numbers and quality of the debate. Out of 68 conference delegates 52 participated. We managed to have 12 bookings from general public, however, only 8 of those took part.

The world café proved to be a good method to allow a free and lively debate: All participants were engaged in the conversation and the mixing of the groups for the different questions allowed people to hear many different perspectives.  The anonymous feedback survey shows that both academics and non-academics felt the relaxed and playful atmosphere facilitated conversations and allowed to listen to a variety of perspectives.

The visualizations produced by Graham Ogilvie provided another level of engagement with the ideas of participants, which became evident when participants were asked to vote for their favourite poster and had to give reasons.

The main challenge proved to be the engagement of public participants. The event was announced online through a blog, through regular tweets and also through posters in key areas of the city. We achieved to have 12 bookings, however, only 8 took part.

For future events, a more targeted and sustained advertising campaign might improve figures, and it might also be better to organize the event later in the day.

Testimonials from the anonymous survey:

Q1) What are the two most important insights you took away from this event?

Q2) What made the event a positive experience?

Q3) How can we improve the event?

Find out more about this World Café event on the official blog at popnat2018.wordpress.com, and on the event Twitter @PopNatConf.