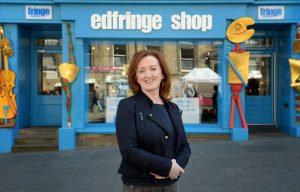 For USEC2017 we are honoured to have Shona McCarthy, the Chief Executive of the Edinburgh Festival Fringe Society, as our keynote speaker!

From 2011 to 2014 she was Chief Executive of the Culture Company, leading on Derry-Londonderry’s transformational year as UK City of Culture, creating and delivering a world-class, citywide cultural programme for 2013.

Prior to that Shona was Director of the British Council Northern Ireland leading her team to oversee international programmes of work across schools, arts and Higher Education to build positive international cultural relations. She also spent many years as Chief Executive of Cinemagic Film Festival for young people; and the Foyle Film Festival; and was Head of Exhibition at the Northern Ireland Film Council. In 2007 she was the Northern Ireland recipient of a NESTA cultural leadership award which took her to live and work in India with Seagull Foundation for the Arts in Calcutta, and in 2014 she was Northern Ireland’s recipient of the Eisenhower Fellowship. As well as her Fringe commitments, Shona is also Chair of Oh Yeah Music Centre in Belfast, and Walk The Plank, a company specialising in outdoor arts and pyrotechnics.

Find out more about Shona on her LinkedIn page: https://uk.linkedin.com/in/shonamccarthy.

Shona will be delivering the opening keynote at this year’s USEC event. We’re looking forward to welcoming you to her talk and the rest of the day. Sign up now on Eventbrite to attend (for free): https://www.eventbrite.co.uk/e/usec-2017-tickets-31771724082.