I am currently cataloguing Jim’s newsletters. He sent these to friends every few months and always did a ‘special issue’ on his trips to the Edinburgh Festival. But 1988 was a particularly bumper year – six pages of plays seen, films watched, friends met and taxis taken. Only the first two page are shown here – get in touch if you want to see the rest.

So if you are not exhausted enough by your own Edinburgh exploits, live vicariously through Jim’s! 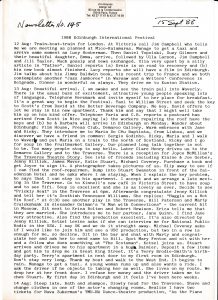 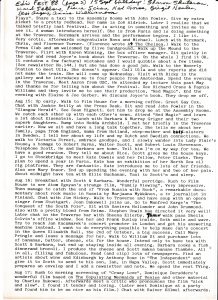 Venue and occasion couldn’t be more appropriate. The film is being shown in George Square. Just round the corner, on Charles Street (at the sign of the rhinoceros head), was The Paperback Bookshop which Jim owned. The basement was a popular fringe venue from as early as 1960. And as co-founder of the Traverse Theatre, which remains one of the cornerstones of the Fringe, Jim’s place in Fringe history is assured.

Fittingly, given the international nature of Jim’s networking, the film is a Turkish, Spanish, German, UK and Cuban co-production by a group of friends who met in 2015 at one of Jim’s legendary Sunday dinners. Directed by Ece Ger, the film was shown at the Edinburgh International Film Festival in 2018 and was nominated for best documentary film. 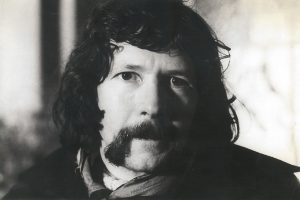 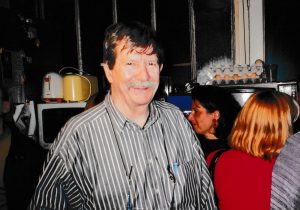