After 6 months of furlough I am now back at work on the project – just in time for Jim’s 87th birthday! In fact I have just finished the papers relating to Jim’s publishing business, Handshake Editions. Below is a cover of one of his own books, Everything Is, in its third Handshake Edition. 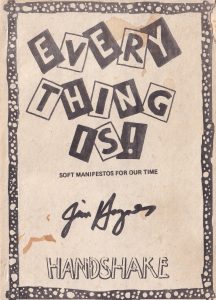 And, I know this could not be less exciting for everyone else, but I now have shelving in the temporary storage room. No more having to shift a pile of boxes to access something. Just to give you an idea of the progress here are some before and after shots. 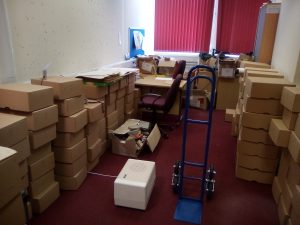 Storage room 6 months into the project 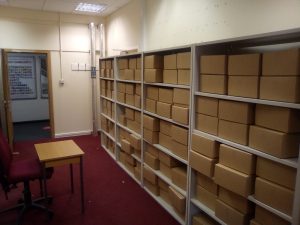 Here is another of the responses I got from my call-out on Jim’s facebook page for personal reminiscences; this time from Julia Watson.

Julia is an ex-foreign correspondent who now writes cookbooks. She divides her time between Washington DC and the UK. She first met Jim through Studs Terkel when she was promoting Terkel’s book “Division Street: America”. This is her memory of working with Jim on Dick Gregory’s election campaign. 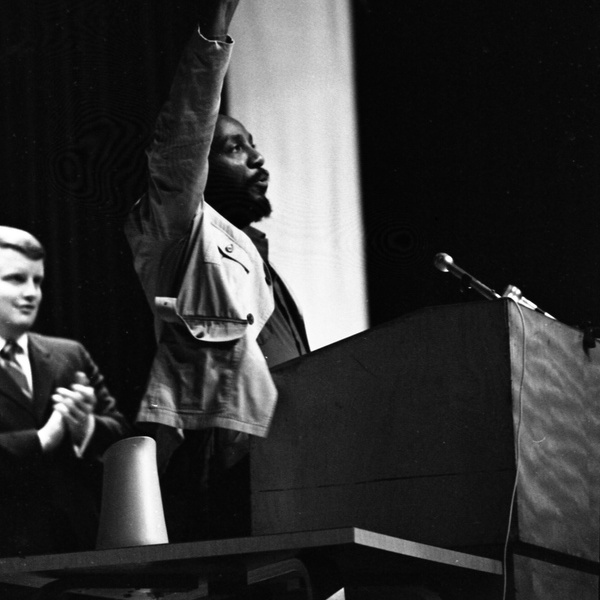 “In 1968, Dick Gregory, the American comedian and civil rights activist, ran in the US Presidential Election Campaign for the Peace and Freedom Party. He came over to London to raise money and set himself and his office up in the Playboy Club. Jim, then running the Arts Lab, helped him fundraise. Jim knew everyone in London useful to know. I was Jim’s sidekick. I don’t remember being useful for anything. In the US, Dick used his stand-up sets to protest racism and fight for civil rights. His campaign platform was pinned to getting out of Vietnam. So many of its troops were black. He had grown a prolific beard and demanded all men give up shaving. He argued that if barbers lost business, they would vote to get out of Vietnam. He wore denim dungarees, not an outfit familiar in London. He declared that if tailors lost their business, they would vote to get out of Vietnam. Dick and Jim and I went out each night to various posh flats, mostly in the area behind the Royal Albert Hall, where men in smoking jackets and women in taffeta held lavish dinner parties. We would turn up at the end of the meal and Dick would give a stump speech and the diners would stump up with cheques which we’d then tot up back to at Dick’s table in the bar of the Playboy Club.”

I posted on Jim’s facebook page that I was looking for personal reminiscences about Jim and I’ve had a few responses. Below is the first of these – a contribution from Rona Thomson. Rona, a retired radiographer, has often had festival performers staying with her in her Edinburgh flat. 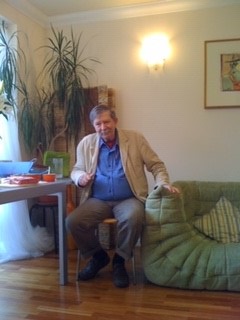 “I think I was introduced to Jim in 1993 by Michelle Banks who was performing in her own show at the Pleasance courtyard. She also performed a show about Josephine Baker at the Hill St theatre. She met Jim at a soirée given by a woman called Herzmark. It was attended by David Johnson (a producer) and Joseph Bonnar. Michelle and I hung out every year she came back. One year I took Jim to the Kings [Theatre] to see Alan Cummings (as Dionysus) in The Bacchae. Jim is so tall, we had front stall seats but so narrow Jim couldn’t get comfortable, but he loved the show…Great memories of meeting him every year. A true gentleman and intellectual.”

She has also twice been to Jim’s Sunday dinners in Paris. She even stayed one of the weekends and helped with dinner. One of the guests she met that weekend was a nurse from USA who was also an international orchid judge! On another occasion she chatted with a lady lawyer from the States who had read about his dinner parties in a flight magazine.

Takk for at du kom (Thanks for Coming!)

Up until the covid-19 lockdown Jim was still holding monthly dinner parties. In January a Norwegian journalist came to one of them and made this programme. Some of the commentary is in Norwegian but the interview with Jim is in English. Enjoy!

Monday 13th April was Samuel Beckett’s birthday. Jim met him on a number of occasions. They had a mutual friend in John Calder, Becket’s publisher, and they lived near each other in Paris.

Séamas McSwiney made this short film of Jim’s memories of meeting Beckett. With contributions by Julie McDonald and extracts of Patrick Stewart and Ian McKellen in Waiting for Godot.

At the end of last year I co-ordinated and contributed to an article for the Counterculture Studies Journal titled ‘Thanks for Coming: Four Archival Collections and the Counterculture’. The article came about through my online search for other collections with similar themes to those in the Jim Haynes collection here. I made some good contacts at the University of Manchester and a number of other institutions. I also found this online journal run by the University of Wollongong in Australia and enquired about the possibility of contributing. I asked my fellow counterculture archivists if anyone wanted to collaborate on an article, and archivists Jessica Smith and Bruce Wilkinson and academic Dr Douglas Field from University of Manchester, and archivist Richard Wragg at University of Sussex volunteered. We’re hoping the article will increase the use of our collections as research interest in this area grows.

I had an email from a close friend of Jim’s with the good news that his health is improving. And he is still doing his famous Sunday dinners! Here is his new year greeting… 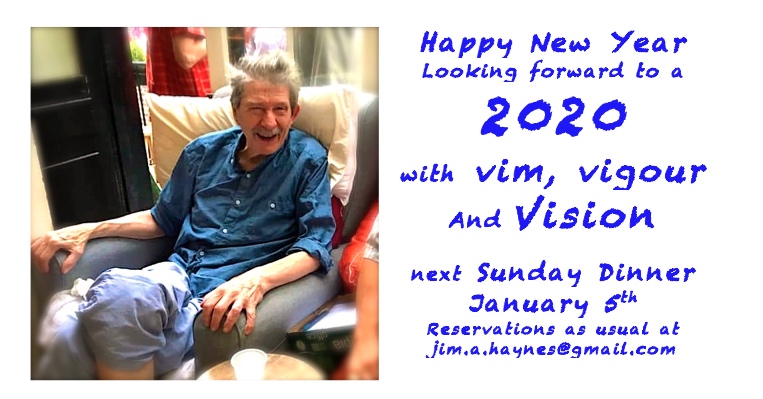 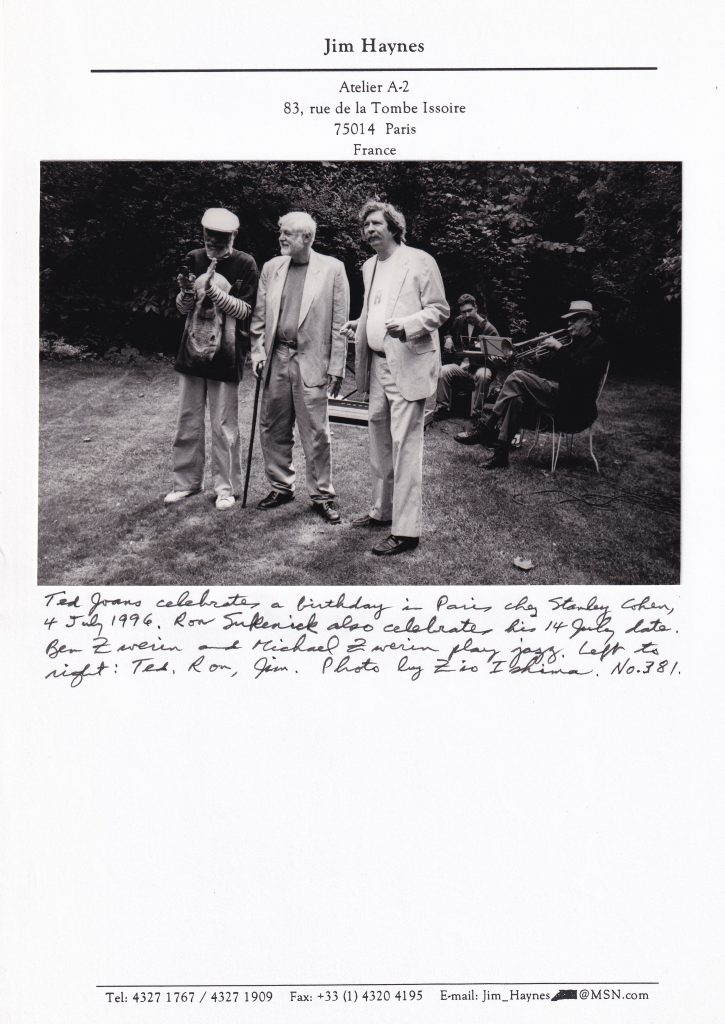 This is our first guest blog. Archivist Bruce Wilkinson at University of Manchester is working on counterculture collections held there. Dave Cunliffe’s collection (described below) includes many poetry magazines which creates a strong connection with Jim’s collection. Jim also collected a number of literary magazines such as Vagabond and Network Quodlibeta as well as publishing poets through Handshake editions. 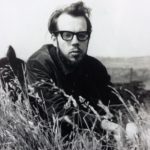 Bruce is working on the literary archive of the poet, publisher and activist Dave Cunliffe recently acquired by the John Rylands Library. The collection includes several hundred poetry magazines and countercultural publications, a huge amount of correspondence and numerous photographs (many of which need identifying).

Cunliffe played an important part in the ‘British Poetry Revival’ (a phrase he coined), using magazines to distribute a literary avant-garde largely ignored by the mainstream media. He connected with an emerging US counterculture, using his BB Books press to promote veganism, animal rights and radical pacifism.

It is wonderful that the University of Manchester Library is preserving this important archive which complements the Dom Sylvester Houédard and Jeff Nuttall collections it already holds.

For a significant figure in 1960s counterculture it may come as a surprise that the reason Jim came to Edinburgh in the first place was because he was in the United States Air Force! I know, right? Not only that but he was a boy scout and he went to Georgia Military Academy. Below are his scout card (note requirement to be square!) and his programme for the GMA Commencement Ball in 1951. 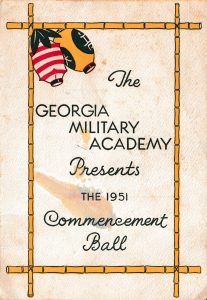